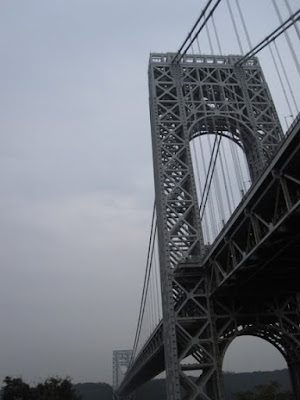 Both times this year that I've been to New York there have been weather extremes. Last February Binnie and I trudged through 17 inches of snow to see El Anatsui and Leonardo Drew in Chelsea. This past weekend, we drove in through torrential rainstorms on Friday and trained in on Saturday in temps that were 90-plus degrees by nine in the morning in the Connecticut exurbs. But what's a little weather when there's so much to see!
So I went a little crazy with the photographs of course and now the thought of resizing and adjusting them is making me feel tired already. But I never expected to use them all. 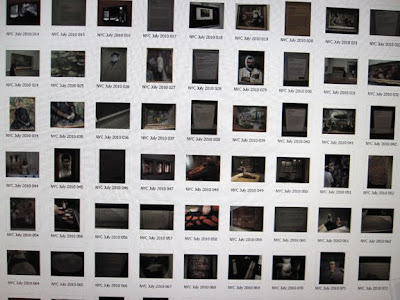 Conveying the vast richness of what we saw seems daunting and better approached by dividing to conquer it all. I propose doing a series of posts with images and details of those I thought were outstanding. Some of them have already been covered extensively and unbeatably by Joanne Mattera, so I'm going to skip those but maybe mention some of my personal favorites in those shows. 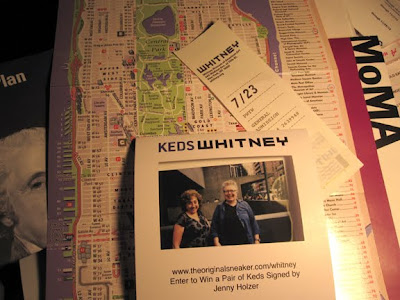 An assemblage of NY memorabilia including a photo of Binnie and me waiting in line outside the Whitney on Friday evening, snapped by a Keds' promotion staffer.
So here is a list of prospective posts with an image from each of them to pique your interest. I'm not sure about the order in which they'll actually appear, but these are things I would like to cover.
Tutankhamun's Funeral at the Metropolitan Museum 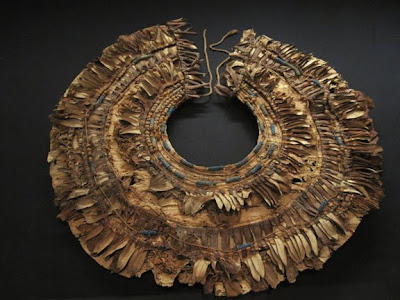 One of the necklaces/collars of beads and leaves found in Tutankhamun's funeral cache, ca. 1336-1327 BC
This was a fabulous show of objects that I have never seen the like of. I was especially bowled over by these collars and other fiber items that have survived more than 3,000 years.
Famous Paintings/Sculptures that are mind boggling in person (mostly at MoMA) 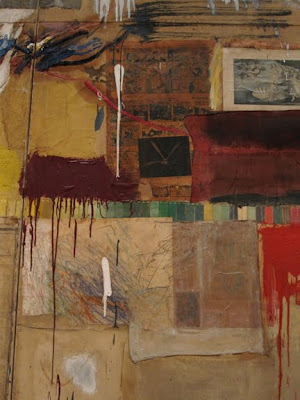 Detail from "Rebus" of 1955 by Robert Rauschenberg, 8'H x 10'11" W
Henri Matisse - we saw the 'Matisse: Radical Invention, 1913-1917" show at MoMA but no photography was allowed. I'm going to use some images from the website (I hope) to discuss it. Meanwhile, here is one of my favorite Matisse paintings that was not in the exhibition because it is was painted earlier. 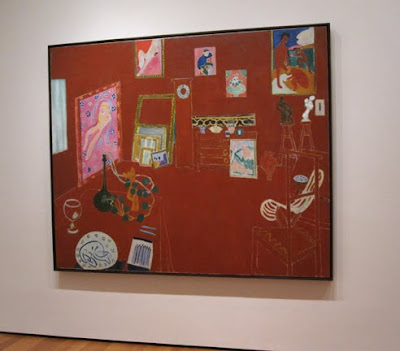 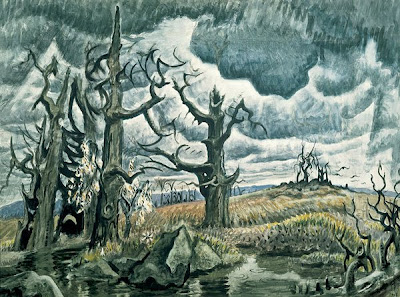 "An April Mood," 1948-1955, 40"x54", watercolor and charcoal on joined paper.
This is a fabulous show of huge, extremely dynamic watercolor paintings. The Whitney did an excellent job with this show and have it installed on the whole 3rd floor. Since they have an asinine policy of no photography anywhere in the museum, I couldn't photo it myself, but I bought the wonderful book and will take some pix from there to show you.
Pictures by Women: A History of Modern Photography 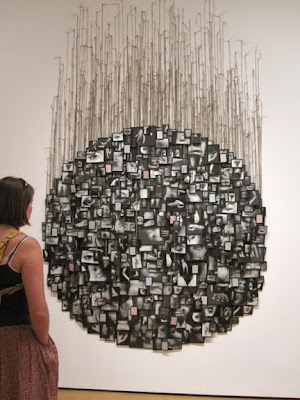 Annette Messager, "My Vows," 1988-1991. (Framed photos and hand-written vows hanging from strings push-pinned to the wall.)
I'm not a photography buff, but I was really impressed with this extensive, inclusive and very well organized show of photographs spanning the entire history of photography. Pretty stunning!
Big Bambu, Mike and Doug Starn, an installation on the roof of the Metropolitan Museum 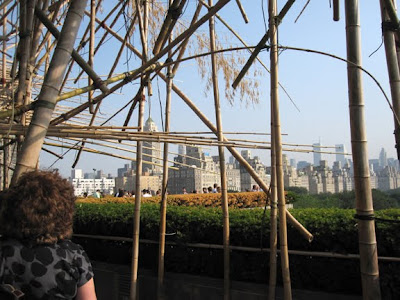 The enormous and intricate bamboo structure alone is worth the trip, but when you view the New York skyline through it (and the back of Binnie's head), it is a totally unique experience.
Other Faves - mostly sculpture - from all the museums 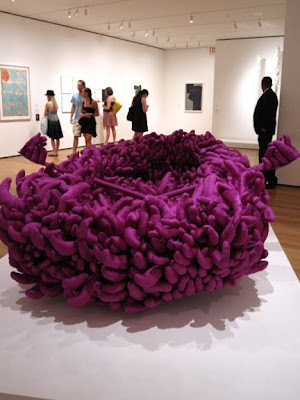 Yayoi Kusama, Violet Obsession, 1994, rowbow and oars covered with "phallic forms" made of stuffed fabric.
My New York posts will begin later this week after the next installation of The Questionnaire - this week featuring Debra Claffey.
Posted by Nancy Natale at 1:04 AM