Tutankhamun's Funeral at the Metropolitan Museum

Years and years ago, before the idea of becoming an artist was even a tiny kernel in my heart of hearts, I read all I could find about Egyptian burial practices. Perhaps it was the wonderful collection at the Museum of Fine Arts in Boston that inspired my interest or just the mystique surrounding that ancient civilization, but whatever it was, I was hooked. (This was also the period when I studied astrology, wore lots of earrings and necklaces and had purple and pink hair.)


I bought some of the reproduction jewelry when "The Treasures of Tutankhamun" toured the U.S. in the late 1970s, and several years after that when I had arrived at art school, I even painted a self portrait in the guise of Tut's gold and lapis mask. Of course I'm kind of cynical about it all after all these years, but I did get a rush when I entered the smallish room at the Met that contained these normally unseen relics from Tutankhamun's funeral and nearby tombs.

The first thing that struck me as being out of the norm were these fiber lids which looked barely worn after more than 3000 years. The broken pieces of pottery behind them were part of a ritual smashing that served some symbolic meaning in the funeral ritual. Many of the jars in this photo had been pieced together from fragments found in the tomb. 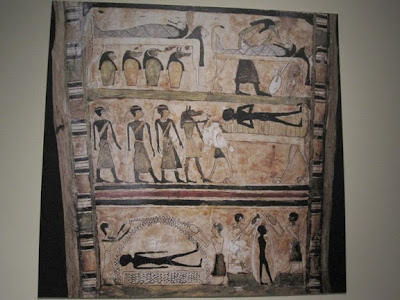 This reproduction tomb drawing shows the mummification process where the corpse is prepared by removing the organs and then immersed in a form of salt for 70 days to dry out the flesh. The desiccated body is then anointed with oils and perfumes, stuffed with sawdust or other materials to fill it out (see later in this post), ritually wrapped with linen and talismanic objects and adorned with a collar and mask if of high enough stature and wealth.


With these fantastic collars was an illustrated chart showing botanical drawings and information about the plants used in creating the collars. From study of bloom times of various plants, scholars have been able to determine that Tutankhamun died in December or January of the year although the cause of his death has long been debated and disputed. Apparently the consensus is that he broke his leg and died of the resulting infection due to his weakened state from malaria. 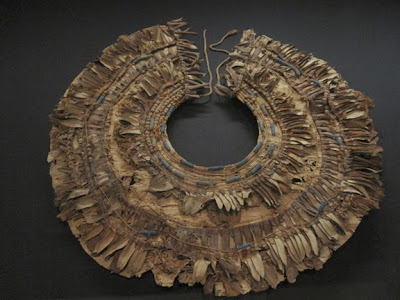 The collars were probably the most amazing part of the exhibition for me. I just couldn't believe that they could have survived so well after thousands of years. Their survival is due to the extremely dry climate and careful handling by archeologists and scholars.


From a wall plaque in the installation: Collars of beads had been in style throughout Egyptian history, but during the New Kingdom 1550-1070 B.C., collars either solely of flowers and leaves or combinations of beads with real material became popular. These collars signified semi-divine or divine status of pharaohs, deities and the deceased. During the Armarna period (1353-1366 B.C) of King Akhenaten (thought to be Tutankhamun's father), floral collars were in vogue for personal decoration and as love tokens between the king and queen.

These details are from a painting of the funeral procession from the tomb of the Vizier Ramose who lived and died around the time of Tutankhamun. The tempera painting was made about 1930 by Nina de Garis Davies, one of the unsung artists of history.

Thanks for sharing these! I'd seen images of the collars, but the reconstruction really makes it more 'vivid' and easier to imagine. Did the exhibition also show the Burton photographs with the mummy & death masks still wrapped in a sort of black oil, and the collor on top?

These collars are so inspirational, and what a history to go with them. All of the work is so basal, like really from the guts of the people, their life and beliefs. The imagery is fascinating. Thanks

I actually never much cared for learning about the Egyptians but you made it fun! I read and enjoyed every word. Thanks for sharing.

Natale, this was such an interesting post. I am envious of your adventure, and I so appreciate your sharing your insights and photos from the Tut exhibition.

I remember well attending the 1979 tour on a cold winter's day in New Orleans. My mother and I waited in line for eleven hours, and once inside I had no regrets. I was the hit of my sixth grade show-n-tell back in Fort Walton Beach, Florida for the next several weeks --- practically a celebrity in fact, as the only one who'd made the trip (seemingly to Egypt at that age and in those days).

Anyway, as a result I created one of my only three art pieces: a life-size replica in papier mache of Selket, a guardian of Tut's tomb. Even today there's a small reproduction on my desk. Photo and a totally unrelated story here: http://www.wendyrodrigue.com/2010/05/lilacs-memory.html

Thank you again for sharing. I can't get to New York before the show closes, but your personal account provided the next best thing.

Hi Ann,
Thanks for your comment. The only photo of the actual death mask was the one I posted that was mounted in the entry to the exhibition. I wanted to show it because of the contrast between the way the mask was found and the way it was presented to the public in touring exhibits. You can see a little bit of the black oil in the photo.

Hi Lynette,
Thanks for your comment. You're right that the works were really moving because of their tactile, handmade quality.

Hi Wax Beach Artist,
I'm glad you enjoyed reading the post and learning about the Egyptians. They had a long and fascinating cultural history.

Hi Wendy,
Thanks for sharing your memory of visiting the Tut exhibition in 1979. I never got to see the original in person and that was quite an endurance feat for you and your Mom to wait that long in line. That exhibition inspired such incredible interest by people who just had to see it. I think it must have inspired ticketed entries into big, touring shows.

I read your post that contained the papier mache Selket you made and you did a beautiful job with her! She was my favorite, too, of the four Tut guardians on the canopic jars. I really enjoyed your story about the lilacs bringing you back to your New York adventure and seeing Dolly Parton. Thanks so much for commenting!