In the Rearview Mirror

Last day of the year and we're all looking backwards to see what's ahead. Maybe it makes no sense to look backwards before you look ahead, but it's what we like to do. As someone who drove around in my old Roachmobile for three or four months this summer without a rearview mirror, I can attest that seeing what's behind you is indeed valuable no matter how unnecessary it may seem. So in that vein, and in an effort to make one final post before the clock strikes midnight, I'm offering you an abbreviated version of my arting trip to New York this past month. I'm calling it:

NEW YORK FAVORITES
(Click on an image to enlarge it.)

1. I'm going to start with a fabulous installation at Tanya Bonakdar Gallery on 21st Street in Chelsea with Tomas Saraceno's "Cloud Cities Connectome."  You can read all about the deeper meanings on the gallery's website, but I found it lyrical, inventive and vaguely like walking around in an illustrated science textbook. 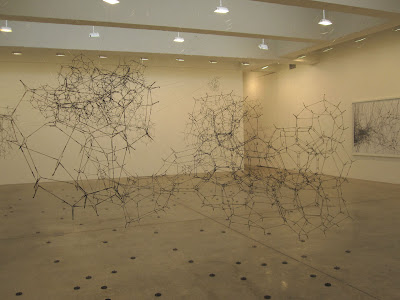 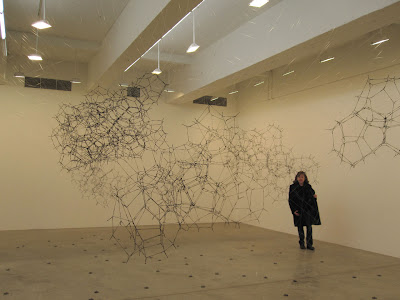 The dots on the floor are where wire or fishing line attaches so that the structures are suspended between ceiling and floor.

2. In the same vein, the Museum of Modern Art's On Line: Drawing Through the Twentieth Century began with a fabulous thread and wax installation in the lobby outside the first gallery. Since photography was prohibited (hate that), I am making do with a photo I took from a Jerry Saltz piece in ArtNet. (See it after his discussion of the Kiefer show at Gogosian.)

To make up for not having a photo of my own, here's a link to the MoMA video on this work.

Another airy installation was made of two pieces of magnetic tape that stay in the air between two fans. You have to see the fans + tape in action to get it. Here's the link.


4. Getting back on the ground, I also particularly liked the work of two artists at the Stephen Haller Gallery: 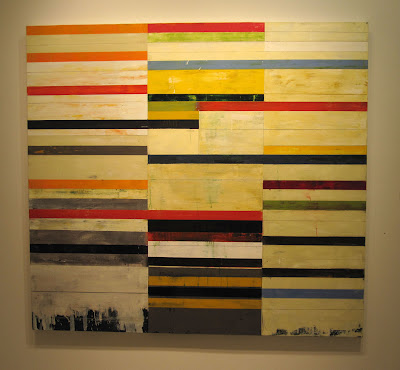 Martin's work relates to the horizontal grid work that I am currently using in my own work.


5. Another artist that the Binster and I really liked at Stephen Haller was Johannes Girardoni.


These works appear to be encaustic over wooden constructions. The color is a deep greenish-grey, and they were very handsome.


6.  Another handsome work, this one from 1962, was an untitled work by Yayoi Kusama at Robert Miller Gallery. The main show was of work by Lee Krasner (God love her), but this work really spoke to me. It had a vaguely African feel, like some of those textile pieces used in ritual dances.


7. Something entirely different was a show of large gouache paintings on paper by Storm Tharp of model Ashby Lee Collinson at Nicole Klagsbrun Gallery.


8. When we left Chelsea and went uptown the next day, we saw more portraits in "Waxing Poetic," a show of works in encaustic by Marybeth Rothman, Francisco Benitez, Willow Bader and Kathleen Thompson at Marymount Manhattan College. Thompson's was the only work that did not represent people. I was familiar with the work of Benitez and Rothman, but the real surprise was Willow Bader's work, which was mostly related to tango with images of dancers and musicians. I loved the way these works were painted in a manner that is most unusual for works in encaustic.


9. Finally, because I went to New York mainly to catch the Abstract Expressionism show at MoMA, here are some of my favorites from MoMA - some of which are not Ab-Ex.

10. Of course I had to see all the Gustons and Rothkos. They felt like old friends to me after reading and writing about them.

Guston did paint some really ethereal expressionist paintings. The warm greys or mauves that he achieved with his rather limited pallette were really lovely against the pinks and reds.


11. And there in the midst of all those boys was one painting by a 100-year-old woman who was one of the only female artists hanging out with all the Ab-Ex guys - Hedda Sterne.

12. Following are two photos of juxtapositions that I really liked:

13. This is something else I really liked: museum-goers, a lot of them young, were studious to the point of reverence in front of the works. It was nice to see that and it made me think that perhaps it's not all just about performing art and/or reality shows. It made me have some hope for the visual arts. 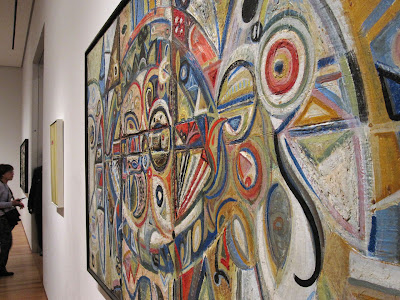 I liked the color and built up surface of this work. It looked as if it was oil over plaster or maybe just sand mixed into the paint.

15. Louise Nevelson - not too well represented in the MoMA collection, or at least not in evidence. But then, you really couldn't call her an Ab-Exer. 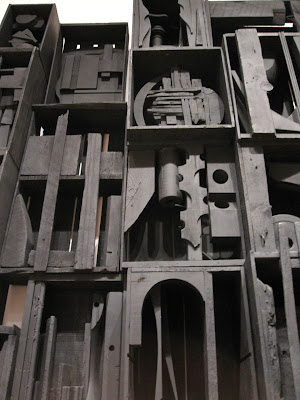 16. Finally, you will never guess what that cluster of ant-like figures are doing down there in MoMA's atrium. 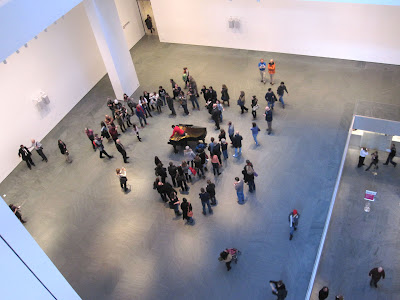 You'll have to watch the video that explains it all.

So here we are on New Year's Eve - me at the computer and you out there having a blast or getting blasted. It's nearly time to watch the crowds in Times Square getting ready for the ball to drop. (But pullease don't make me watch Dick Clark.) 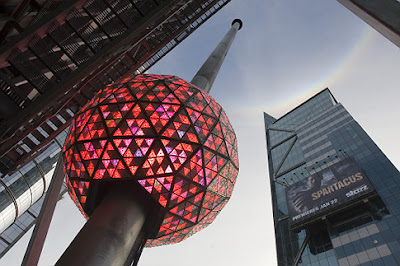 Twenty-ten has been a good year, as years go. But better days are ahead - let's hope. 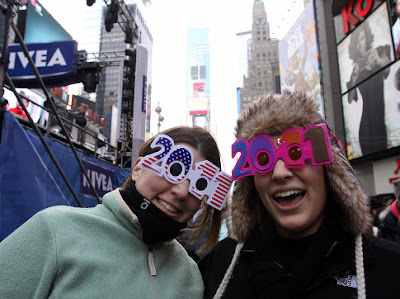 HAPPY NEW YEAR to all - and to all a good night! 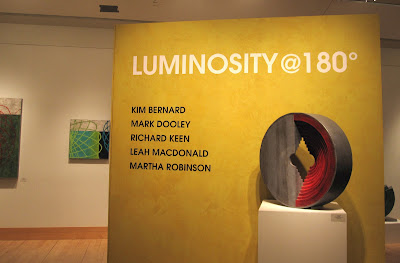 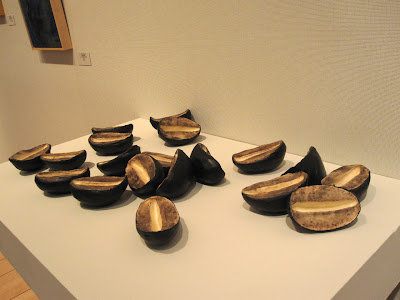