I've probably learned more than ten, but that's just to pique your interest. Everybody likes a list, don't they? You can find my list later in this post.  (By the way, you can click on these images to enlarge them.)

So where have I been for a couple of months? I've been right here working in the studio, working at my part-time jobs, getting most of my brain sucked away by Facebook and following politics. Those last two items are pretty much interchangeable.

The big event of my summer, after the Encaustic Conference of course, was my show at R&F Paints in Kingston, New York. That show began on August 6th and is up until September 22nd. There is still time to see it if you are in the Hudson Valley area. Here's the link. 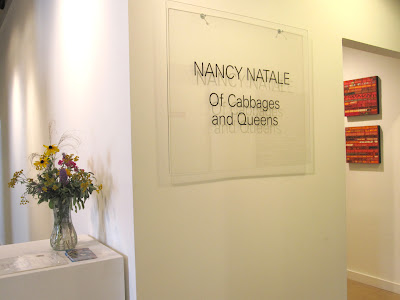 What a fantastic pleasure it's been to have a show at R&F! First of all, R&F (major manufacturer of encaustic paint) is where I was introduced to encaustic painting some years back. At that time I could never have envisioned being invited to be a Visiting Artist at R&F and have a solo show of my work, so it's a thrill to have achieved this honor and milestone in my career.

(You can see more installation shots of the show on my website, nancynatale.net, link here, as well as a wonderful review written by Lynn Woods of The Kingston Times.)
.
Secondly, the people of R&F are just great - all very friendly, helpful, aesthetically minded and pretty laid back - a winning combination! Laura Moriarty, Gallery Director, was a pleasure to work with and installed the show with ease. She also mentored me in my three-day Bricolage With Wax workshop, giving advice and assistance where needed (and there were times I definitely needed it).

The workshop was attended by nine hard-working and enthusiastic students. The mission was to make works of fine art using found objects with encaustic where the objects were not the focus of the works but were used to add another layer of meaning to the works. The objects had to lose their individual identities and become transformed into parts of the whole. This can be a tricky task, especially when you are working with plastic alligators and other easily identifiable things. I'm going to post some photos of student's work on my Art of Bricolage blog later in the week.


What About That List?
Yes, it was a come-on, but I'll give the list a shot, as follows:


Ten Things I've Learned From Art
1) Be persistent
2) Tackle the impossible by starting with the possible - or vice versa.
3) Make lists.
4) Tear things out of magazines and newspapers at will. One of these days you'll look at them.
5) Anything can be an inspiration
6) You will not understand anything you are doing until you have been working at least 20 years.
7) Don't be afraid to be simple and direct.
8) Keep a pencil and paper beside your bed (not a pen because it won't write upside down).
9) Marry someone who loves art (and you).
10) No matter what, it's worth it.