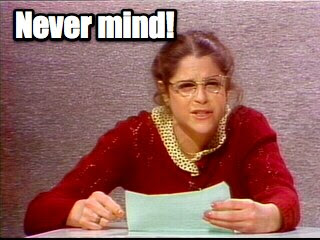 You remember Emily Litella on Saturday Night Live? She was the Gilda Radner character who always got it wrong and ended her spiel with "Never Mind" after being corrected to something like violence on TV when she thought it was violins on TV. Well, just call me Emily because, son of a gun, I got the date wrong for my New York trip. It's next weekend that we're going. Duh! I sure feel Emilyish.

So, still time to make suggestions for shows that we might see. We have MoMA and the Met on the schedule and possibly the Whitney, but we are looking for gallery recommendations.

The Writing Analyzer Tool
I wrote about my results in last night's post and had reports today on Facebook from Joanne Mattera and Pam Farrell of weird responses they also got when they put writing samples into the analyzing tool that tells you who you - supposedly - write like. Joanne called it the Magic Eight Ball of letters and said she got David Foster Wallace, Dan Brown and Arthur C. Clark for her samples. Pam's combo was a good one: Arthur Conan Doyle and Stephen King. Wendy Wolfe Rodrigue got Stephen King and Raymond Chandler for her matches.

In all the reports that I heard about, the tool came up only with male writers, so I resolved to get it to come up with a woman. I tried getting some writing samples from Amazon, but the copyright laws prohibit that, so unfortunately, I had to find a few books around home and type some samples in. (A good thing that those secretarial courses in high school made me a fast typist.)

The tool correctly identified Margaret Mitchell and Jane Austen, but all the others were misidentified. Most of the ones I put in were male but there was one female and one male writing in the voice of a female (Arthur Golden from Memoirs of a Geisha). Anita Shreve was misidentified as Stephen King and Marcel Proust as Charles Dickens. I didn't have any romance novels around (I'm so literary) so I couldn't test them for femaleness by putting in Barbara Cartland or her ilk.

A Little Analyzing Contest of My Own
The tool is not so great and Joanne was right about it being the Magic Eight Ball with Stephen King, Dan Brown and David Foster Wallace being the most popular answers, but how about we play the game ourselves with one sample and see if you can identify this pretty famous contemporary writer.

The best I can do in the face of our history is remind myself that it has not always been the pragmatist, the voice of reason, or the force of compromise, that has created the conditions for liberty. The hard, cold facts remind me that it was unbending idealists like William Lloyd Garrison who first sounded the clarion call for justice; that it was slaves and former slaves, men like Denmark Vesey and Frederick Douglass and women like Harriet Tubman, who recognized power would concede nothing without a fight. It was the wild-eyed prophecies of John Brown, his willingness to spill blood and not just words on behalf of his visions, that helped force the issue of a nation half slave and half free. I’m reminded that deliberation and the constitutional order may sometimes be the luxury of the powerful, and that it has sometimes been the cranks, the zealots, the prophets, the agitators, and the unreasonable – in other words, the absolutists – that have fought for a new order. Knowing this, I can’t summarily dismiss those possessed of similar certainty today – the antiabortion activist who pickets my town hall meeting, or the animal rights activist who raids a laboratory – no matter how deeply I disagree with their views. I am robbed even of the certainty of uncertainty – for sometimes absolute truths may well be absolute.
The tool thought it was Stephen King.


Finally: Some Images of Found Art (after all this blog is supposed to be about art) 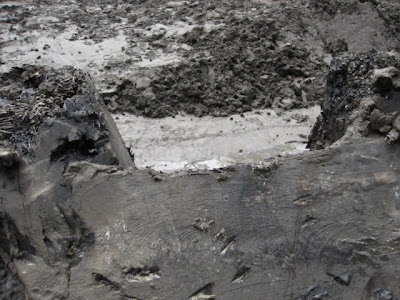 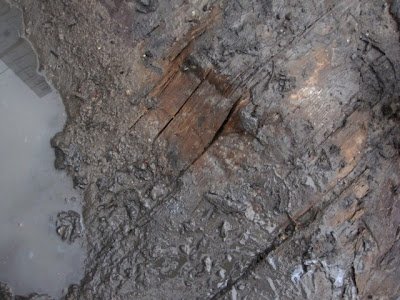 Two shots above from the World Trade Center site where part of an 18th century ship was found during excavations. This area had not previously been excavated for the Twin Towers or other buildings. Archeologists think the ship was deliberately sunk into the Hudson River on purpose as part of a landfill operation. (See more images here.)
Posted by Nancy Natale at 11:38 PM

I came across this info about the I Write Like tool: http://zia-narratora.livejournal.com/627422.html

Deanne - that was wonderful info. So not surprising that someone would put 37 male writers into a database with only 3 women. Will it never change? Thanks so much for the link.

Leslie - that's a great quote from Gilda. I'm going to send you the ship image link if I can find it.