And the Oscar goes to...

Sunday is a day I treasure because I usually spend it ensconced on the couch reading just about every word of the Sunday NY Times. I am a fairly new convert to this paper, having grown up on The Boston Globe, but happily having graduated from that paper after moving to western Mass. I now consider the tone of most Globe articles despicably snotty and I wonder if the change is in the paper or in me.

So yesterday I was reading away in the Times and arrived at "T" - the "style magazine" of the Sunday Times that occasionally has articles about art and current events. Many Sundays I skip this magazine because it's full of emaciated models in excruciatingly-expensive designer clothes posed in decayed buildings or vacant lots. (Not exactly my cup of tea.) But yesterday there were two articles of interest to me - one that absolutely made my blood boil and the other that I loved because of the photo of fabulous art and biographical info about the artist. The surprising thing is that both articles had a connection to Cummington, a small town out here in western Mass. (I'm always looking for that place connection.) 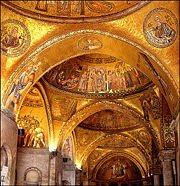 First the good news, some time ago Joanne Mattera included an image of work by El Anatsui on her blog. I was bowled over by the work's shimmering beauty that reminded me so much of the glowing, golden Byzantine mosaics at St. Mark's in Venice.

(Image at right shows the golden ceiling mosaics in the Basilica di San Marco, Venice, made from clear glass tiles with gold leaf on the back.)


Rather than mosaic, El Anatsui composes his works from aluminum bottle tops flattened into rectangular shapes or circles and joined into a sort of fabric with copper wire. 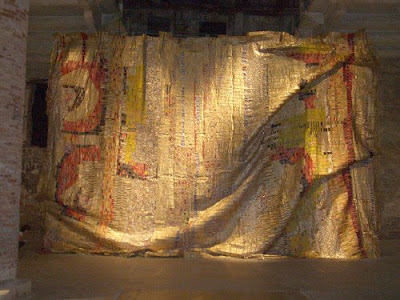 The article about El Anatsui in yesterday's "T", was entitled "A Thousand Bottles" and written by Alexi Worth (an artist himself whom I met years ago when he lived in Boston). The print story featured just one photo of Anatsui's work but the online version has a slide show of several pieces. There was a photo with the story of Anatsui, who is a Ghanaian and professor of sculpture at a Nigerian university. The article related that this work started when Anatsui found a discarded bag of bottle caps, brought them back to his studio and began experimenting.

Reading about the various styles and bodies of work Anatsui made over the course of his career was very inspirational because it shows that some artists take years to find their stride, but when they do strike it, they know what they're doing because of all the years and experiments behind them. This work is fabulously beautiful, but the artist does not treat it as precious and insists only that when it is exhibited, it be draped like fabric rather than hung flat. Exactly how it is draped is up to the gallery or museum although Anatsui does prefer horizontal ripples or folds. 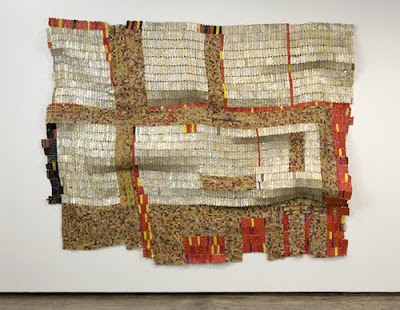 This was a wonderful story and I really enjoyed it. (And the Cummington connection was that Anatsui had spent a residency in Cummington, MA some years ago where his use of a chainsaw led to a new body of work. I thought the chance of Anatsui ending up in Cummington from across the globe was really a strange little factoid.)

Now we come to the blood boiler, entitled "Butch Fatale: Lesbian glamour steps out of the closet. Daphne Merkin applauds." This sexist essay, supposedly celebrating lesbian glamour and centered on Rachel Maddow (part-time resident of West Cummington), displays Daphne Merkin's ignorance of and disdain for lesbians in nearly every line. Beginning by calling them "wallflowers at the homosexual dance," she goes on to decry lesbians with and without makeup, with and without fashion, famous and unknown, who participate in "a silly game played by a tiny pack of unalluring inverts."

Too bad you are so ignorant, Daphne. Why write about a topic on which you know worse than nothing?

Rather than lauding Rachel Maddow for her outstanding intelligence, awareness and ability that has taken the world of political commentary by storm, Daphne chooses to focus on Rachel's appearance and the fact that "she's not trying to pass, but she's willing to prettify her image sufficiently to endear her to male viewers." This is among the most ludicrous statements I have ever encountered and it can only be saluted with a chorus of loud Duhs followed by several letters to the editor. You are an insulting fool, Daphne, and I hope that you drown in the sea of stupidity that is your alleged writing. You get the Oscar for Best Supporting Homophobe.

And speaking of Oscars, if you didn't manage to stay awake (as I was not able to), take a look on Youtube at Sean Penn's gracious and intelligent acceptance speech for winning Best Actor and listen to what he has to say on the subject of civil rights for non-heterosexuals.
Posted by Nancy Natale at 1:00 PM