When I posted that item about my name becoming "Natale" yesterday, I said it was about 20 years ago. But thinking about it later, I decided it was closer to 30 years ago. Tempus does fugit. And that's on my mind today since it's my birthday.
It's not a particularly memorable birthday, but it does mark time. I spent part of the day doing something no one should never do on their birthday (maybe not on any day) - trying on pants. What the hell was I thinking??? Well, it was actually not too bad, all in all. I did find some pants even though the state of my body is, shall we say, regrettable.
But, we're moving on from that to a better day tomorrow - hopefully getting to the studio to plunge in again to some new work.
Meanwhile, I'm so sick of this yucky winter - freezing cold in the low teens every night, the yard a mass of ice so we have to wear cramp-ons to walk around and surrounded by dirty snowbanks everywhere - will it never end? The only green we're seeing are the green lights on the St. Patrick's Day shamrocks in the window across the street. (The holidays charge frequently and punctually over there.) So, here are some garden photos to share something a little green and tender in this drag-on season. 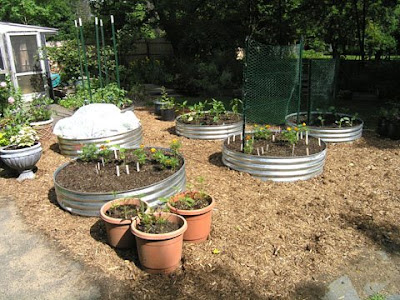 Early spring with seedlings and seeds just starting. Those metal circles are raised beds planted in fire rings. This is end May/early June. 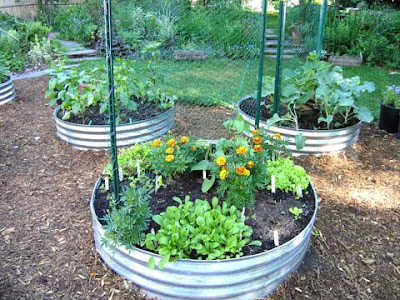 This photo was taken June 22nd - probably three weeks after the first photo. The arugula and lettuce are up, peppers and broccoli growing. 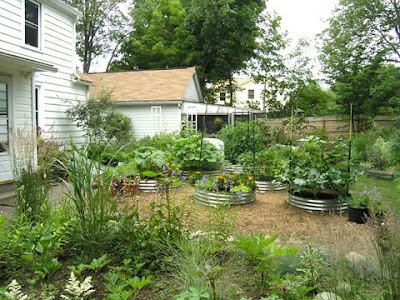 And this is mid July - another couple of weeks later. It's amazing how much growth emerged in just a few weeks. 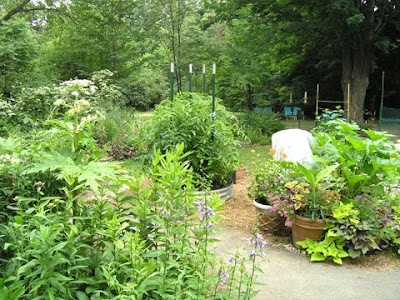 Here's another view from early July.

These pictures were all taken in 2007 because last year was such a miserable spring that our garden was pretty horrible. It was cold very late and then extremely wet all spring and most of the summer. The tomatoes were drowned and got fungus blight, and I didn't plant much of anything else besides chard and arugula - not even beans. I'm hoping that this year will be better both for the weather and for my interest and energy.

hApPy BiRthDAy! I'm thinking of the next garden too.

Where do you find fire rings like that? Google took me to the fancy kind. Love the look of your raised bed garden... gives me ideas!

Thanks, Leslie. I appreciate your good wishes. Thinking about next year's garden during non-gardening season is good therapy.

Karen, glad you liked the rings. We got them at Tractor & Supply. They come in 2 sizes and these are the larger ones, 4' in diameter, about $70 each. They're heavy galvanized steel - very durable and you just plop them down and fill them up - simple!

Thanks... bet I can find some!