Reworking encaustic paintings is pretty simple because you can just use some heat and scrape off whatever you don't want - either a layer or two or the whole thing, but yesterday's post about reworking acrylic paintings got me thinking about another way of recycling paintings - combining an older painting with newly-painted partners to make a diptych or triptych. 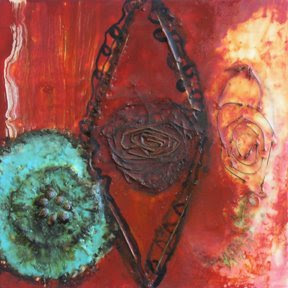 So here's an encaustic painting I made in 2007. I called it "Trinity" and it's 12"x12". I never showed it anywhere because the color pallette is really different from the one I normally use. This painting primarily uses three lovely Evans Encaustic colors: "Joanne Loves This Red" - a rich, dark orangey red, "Duochrome Blue Green" - a fabulous color that breaks to a bronzy sheen when painted over black, and "Cloisonne Pink" - a dense, reddish pink. It also has some drawing in black, a little streaky white, embedded plant parts and black oilstick.
I liked this painting because of the strange placement of the three components, the kinda weird color combination and the way some of the colors broke when painted over what was underneath. What to do with it? I could paint more in this pallette, let it kick around the studio as a singleton, sell it to someone who was on the same strange wavelength - or paint some companions to go with it.

Here's what it became: I chose to turn it around and paint two other panels to combine with it, making it a triptych that I called "Red, Black and Bumpy," 36"H x 12"W. Turning "Trinity" sideways caused the central image to look like an eye (maybe an eye wearing a cute little hat) and that made it a little mysterious. I like the way the more geometric elements in the two panels below play off the original, more organic panel. But don't think that this solved the problem because now I have the triptych as an oddball! Guess I'll just have to paint more to go with.
Posted by Nancy Natale at 7:21 AM

I would love to learn this technique I am on south shore mass.!

I'll ask our group, New England Wax, if anyone is teaching in your area and let you know.

You really are in a recycling mode aren't you? You've given me inspiration to do likewise. Isn't it interesting what one turn to a painting will create. I don't find this colour combo odd. The two textured pieces really support your original work.

Encaustic is such a wonderful medium. I'm more attracted to the possibilities every time I try it. It allows you to combine so many different materials for layering.

My one concern is the toxic nature of the process. What are you using as an exhaust system? Any advice on this topic would be much appreciated.

Thanks for your comment, Margaret. In fact, encaustic is not toxic but the wax can be an irritant. I'm going to do a post on this. Meanwhile, you can see a 4-page informational pdf from R&F Paints at http://www.rfpaints.com/PDFs/Tech%20Sheets/Venting%20Your%20Studio%20for%20Encaustic.pdf

Bad choice of words from me. I have to be so careful with respiratory irritants that if it bothers me at all I feel it is toxic to me. If you over heat the wax it is my understanding that the fumes produced are certainly problematic health wise. I'll check out the link. I did have a good set up and my second hand industrial strength fan broke. I now have to put some thought and probably money into a good system.

The key is to keeping the wax at the proper temperature (below 220 degrees) and if you do, there are no fumes. I actually keep mine at around 200 degrees or below and have not had any trouble unless I work for several days straight for 5 or 6 hours a day. I don't have a vent fan yet but plan to set one up soon.

On a Whimsey said...

I love seeing how encaustics can be changed or evolved! What a fascinating medium it is!!

For Couture de Papier - I asked our group about encaustic classes, and it seems the best bet right now is Tracy Spadafora, a well-known artist in the area who has been teaching for a long time. You can email her at spad4@charter.net to ask about classes. Good luck!

Nancy, Great image! I love the eye...( I am into eyes at the moment :-)
The overall feel of color and composition is wonderful as well.
I am enjoying your blog and posts.
Hope you feel better soon,
Alicia

Thanks, Alicia. I'm glad to have you aboard!

Hi Nancy,
Thanks for the tip about the Duochrome Blue Green over black. It does take on an aged metal look and I never knew that.
And thanks big time for the current post on Obama's need for vocal support. Phone calls to the district offices are definitely heard.
See you in June - dinner again? Hope so!
Hylla

Hi Hylla,
I'm glad to give you that info about DC Blue Green. I think it works for all interference or duochrome colors - painting over black does something to metalicize them in a different way.

And glad you're with me on supporting Pres BHO. It only took me 10 minutes and that included putting the numbers into my cellphone!

Yes, we're definitely on for dinner in June.
See you then!