It's All About the Paint, Isn't It?

Physical Geography, the show that Lynette and I have up at ArtSpace Maynard is nearly over. It runs next Wednesday through Friday and then we take it down on Saturday, 2/28. Both of us are pretty damned sick of the whole thing. We have had to be there the last 5 Saturdays in a row and next week will make 6 (although I bailed one Saturday and Lynette gallery sat by herself.) It is feeling more like work than pleasure because it's taking time away from being in the studio.

So now I'm thinking about the whole process of making art and all it entails: photographing, cataloging, proposing exhibits, hanging it, exhibiting it, marketing it, wrapping it, shipping it, etc. and how much it becomes about the physicality of the product, like moving iron instead of joyously expressing some component of your inner being. (A little sarcasm there, but you get the point.)
Our pal Sue Katz, fellow New England Wax member, came to our talk on Saturday and asked Lynette about the meaning of her work and/or her inspiration. Sue loves to talk about this subject and we have had many conversations about it. (She is also giving a participatory talk about it at the encaustic conference in June.) 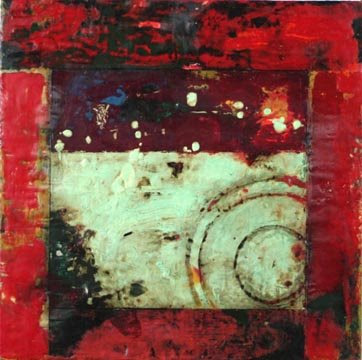 Lynette was a little nonplussed because she had already spoken about some of the work in the show being inspired by trips to Europe and Cuba where she saw ancient (or at least old) walls that had been scarred by time and use into a patina of old paint, wallpaper, dirt and marks representing layers of human life. Beyond that, she wasn't ready to dig too deeply into her motivation or meaning since she thought her work was more about the process of making the thing itself than expressing some inner belief or need. 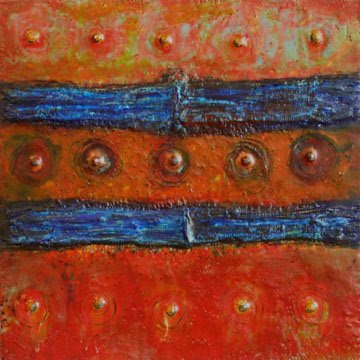 Someone once asked me what a particular piece was about and I said, "Paint." When I make a painting, it is what it is, not what it represents. I am all about process and object making. However, as the process of making a piece evolves, it may suggest things to me; perhaps it reminds me of an old wall or a textile or an undersea world, but that's not what it's about - I am not trying to create that thing.Usually when you have to confront this subject of meaning in your work, it's because you have to write that dreaded (or dreadful) artist's statement. Some of that stuff is such high-falutin' blather that you could never understand any of it, and the less said, the more words it takes to say it in. Yet people (especially curators) love to read this stuff (which is a little silly because if they really get into your work and study it, they make up their own meaning anyway).

These days, when I write a statement, I usually say my work is about gardening: the structure in the painting representing the man-made elements in a garden (hardscape) with the paint and/or plant inclusions representing the organic components (planting). But often it is described as "quilt-like," which I guess it is, although this is not on my mind when I make it and doesn't occur to me afterwards. (A recent art writer said it was "a Willy Wonka take on Mondrian.")