A Demo Turns Up New Non-Family 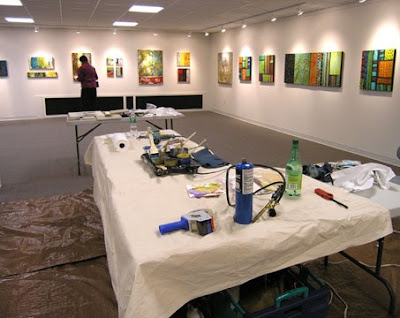 On Saturday Lynette and I did an encaustic demonstration for Physical Geography at ArtSpace. We had a really great turnout of about 40 people who asked plenty of questions about the process and paid close attention to our presentation. 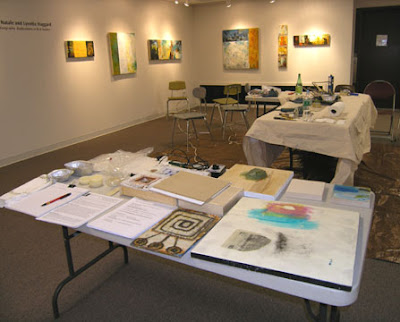 Show and Tell table with sample in-process panels, samples of raw wax and resin, handouts, etc.
We had a fun time with our tag team approach. First one of us showed something and then the other stepped in. If one of us forgot something, the other filled in the blanks. It worked very well and was much better than demonstrating alone - a lot more fun and less nervious-making. 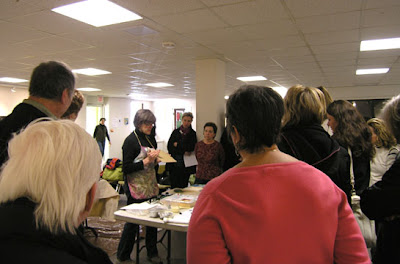 Lynette at the Show and Tell table talking about supports. 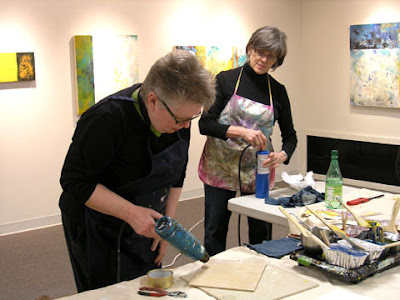 Here I demonstrated fusing with a heat gun while Lynette prepared to show how to fuse with a propane torch. 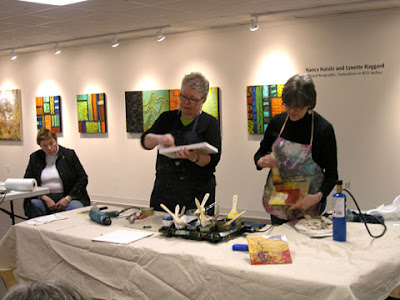 Another shot of the tag team approach - Lynette overpaints with red while I think I'm rubbing off excess oilstick. 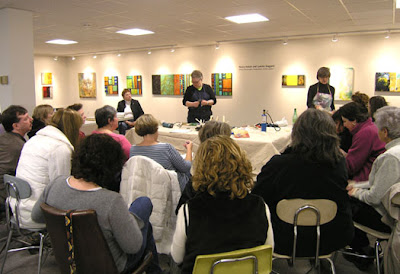 View from the back of the room. 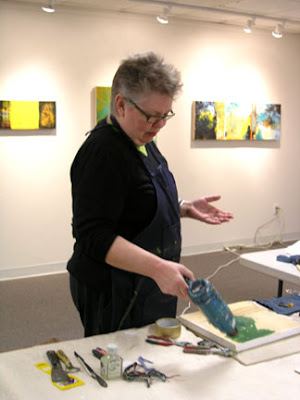 We also spoke about the work that was hanging in the show and explained how various effects were achieved. I revealed the identify of many of the materials incorporated in my paintings and made everyone sign secrecy agreements before they left.

Here I'm showing that it's important to use only one hand for fusing so that the other will be free to gesture.

Probably the most important information we conveyed in this demo was that ENCAUSTIC IS NOT TOXIC when wax is kept at the proper temperature. So many people have misconceptions about this. We talked quite a bit about temperature, composition of encaustic paint, non-inclusion of solvents, etc. to counter people's previous ideas and showed them the R&F Paints handout about setting up your studio for proper ventilation.
An interesting thing that happened after the demo was that four people came up to me whose name was "Natale." (They pronounced it "Natalie" like the woman's name, whereas I say Natale with a silent "e" the French way, as in femme fatale.) They came to the demo because they had seen my name in the paper and wondered if I was a relative. They had a now-deceased sister named Nancy Natale who was also an artist, and while they sat through the demo, they were looking for resemblances between me and their family. They did see several physical points of comparison, but I had to tell them that it was just coincidence because "Natale" is actually an acronyn name that I composed and adopted about 20 years ago. It comes from the initials of my birth name, the last names of two ex-husbands and a final "e" for "end." They were very gracious about it and didn't seem too disappointed, but neither did I get the invite to the family Sunday dinner.
Posted by Nancy Natale at 1:17 AM

Wish I'd been at the demo, but found today's talk really inspiring. I appreciated how down to earth you both were and how clear in your explanations. (please pass this along to Lynette, too). Thanks for your beautiful work and willingness to share ...

Thanks for your comment, Julia, and for coming to hear our talk!