Several years ago I began painting with thin washes of acrylic paint on Okawara ricepaper. The Okawara comes in big sheets 72"H x 38"W, so I would cut pieces off and paint them in an all-over pattern like wallpaper. Then I would assemble a painting composed of geometric elements of the patterned papers I had made. 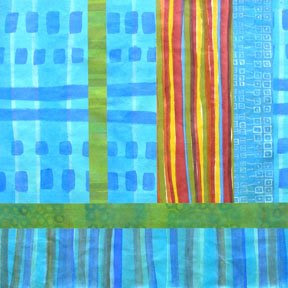 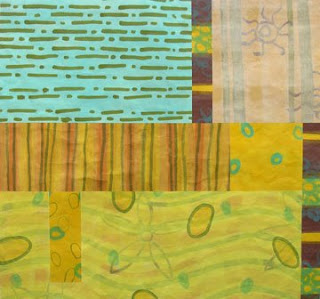 "Willow Stripe", 32"x30", 2005
Both of these pieces sold to corporate collections through art consultants, and I did well with this work because it fit the parameters that some corporate collections have: no images of people or animals, no words, colorful, non-controversial. It was easy to ship because I just rolled it into tubes and sent it off (I did not supply the frames), and I enjoyed making it (mostly) because I had the freedom to explore my love of patterning, and I liked the challenge of assembling a final piece from the pattern portfolio I had prepared.
I did get a little tired of doing it and went on to painting in other mediums, but they were harder to sell and harder to ship.
Last year I decided to pursue this work again and placed some pieces I had in my files with a new consultant. That work sold pretty quickly and I had nothing to replace it with. I was totally engaged in painting with encaustic and couldn't drag myself away to work on paper until last week. (Funny how the need for some cold cash can get you busy!) In the meantime, I had taken some work back from a consultant in California and wanted to reuse it. When I took a look at what they had sent me (dating back to 2001), I knew why this work hadn't sold. It was just not fully realized. In fact it was ready to go under the brush again.
So far I have completed two pieces of new work made from the old work I took back. I thought it might be fun to post some images of the old work and see if you can recognize it in the new. Apparently I didn't photo all the old work I received back, so not everything I reused is included here, but a lot of it is. So here are five pieces of the returned work. The squares are 24"x24" and the horizontals are 18"x80". 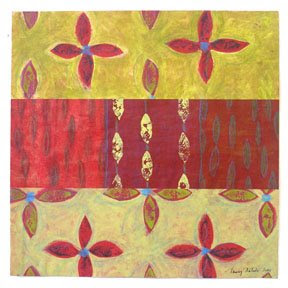 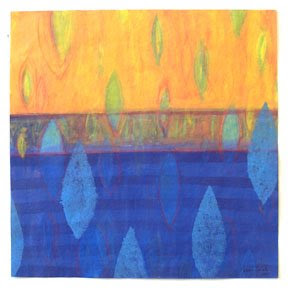 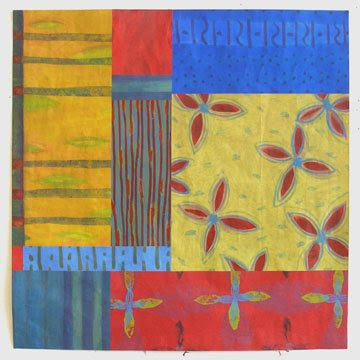 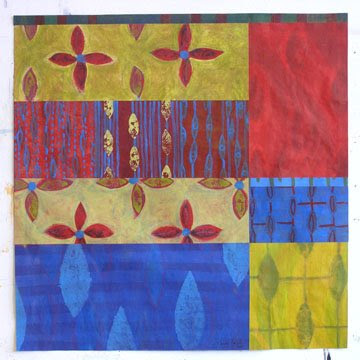 Temp title: Red-Blue-Gold No. 2, 34"x34"
For the most part, I just gave a new wash of color to certain sections. I did do a little bit of painting to introduce some smaller scale marks. These were fun to assemble, and although they're more decorative than what I usually do, I think they work. 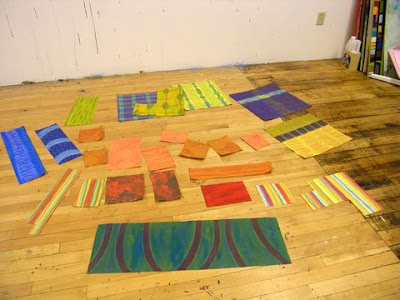 This is what it looks like when I'm making new pieces from old. I cut up some old work, over-paint it and put it on the floor to dry. There's really not enough here to make new pieces so I'll have to paint something fresh that can work off these colors.
Who knows if corporate clients are still buying artwork? Does the bailout cover that? I hope so because I lost one of my at-home, part-time bookkeeping jobs due to that psycho Madoff stealing money from my client and thus stealing my livelihood, too. It's the trickle down effect of greed. You'd think being poor(ish) would protect you from all that, but nooooooo!