I had only half an hour to run in for a look at Anna Hepler's show "Makeshift" at the Portland Museum of Art (PMA) when I visited Maine a week or so ago. But that was long enough to enter the Museum's Great Hall and be entranced by Hepler's massive plastic web installed under the central skylight in the hall's huge open space. What a magical display of light and volume she created from salvaged tarps and boat wraps!
(NOTE: Click on photos to open up large.)

Anna Hepler's exhibition at the PMA, called "Makeshift," consists of four parts: The Great Haul, Full Blown, series of 12 Inflatable Drypoints and 8 "Cyanotypes"  (each to be explained later). The Great Haul was not part of the original exhibition proposal but was added later when Hapler convinced curators that this installation would take advantage of light spilling into the museum's entry hall and draw viewers into the space to see the work. Fortunately, she had her way because this piece is the star of the show and a wonderful creation that draws attention not only to itself, but to the volumetric architecture of the space.

To understand what really went into Hepler's creation of this piece, you have to watch the 12-minute video by David Camlin produced for the PMA. Believe me, you won't be sorry that you invested your time. Hepler is thoughtful, intelligent, inventive and a great art talker. The video shows her gathering skanky used tarps (without gloves or special clothing!) and boat wraps for the piece, then cutting the plastic into manageable hunks and then slicing those into strips that were sewn into latticed nets on sewing machines by Hepler and an assistant. When the piece was installed at the museum, nets were joined together by staples. If you go up close to the piece, you can see lengths of sewing thread in various colors sticking out from seams and adding a delicate extra dimension to the work. (If I had been taking the pictures, I would have taken one of this.) This was a gargantuan effort because the piece is 20 feet x 20 feet x 20 feet. Light falls into the piece from above but seems to emanate from inside the huge webs, which are actually double webs - blue inside and clear or white outside.

Upstairs on the fourth floor is an open gallery, more like a balcony or mezzanine that is open above to skylights and open below to a large gallery on the third floor that contains the PMA's limited collection of contemporary art. In the photo above you can see in the distance a deflated version of Full Blown and the wall of cyanotypes on the right.


Full Blown, like The Great Haul, hangs from a skylight so that it receives natural light. It's a translucent but relatively solid container for the compressed air which blows into it from a compressor above and inflates it every 16 minutes. Then air slowly leaks out through the taped seams or thin plastic and it goes to a deflated state. In the video, you can see Hepler very excited the first time it's blown up and she gets to look inside the giant balloon.

Light and volume are the twin focuses of Hepler's work and even in her drypoint prints (that she calls "Inflated Drypoints") and cyanotypes she has found a way to translate three dimensions into two by first building volumetric structures using plastic and tape. Tape forms the skeleton of the pieces.


Then there are the cyanotypes, but they are not just cyanotypes per se. To make cyanotypes, you coat paper with a light-sensitive solution that turns blue when exposed to light. You let the coating dry in the dark, then expose the coated paper to a strong light (sunlight or bright lightbulb) with an object on top of the paper. The object that you wish to capture interferes with light hitting the coated paper and that part does not turn blue. You are left with a negative image of the object against a blue background. Dimensionality of the object is indicated by the clarity of the negative; parts that are farther away from the paper are less defined than those that are close.

Hepler used this process but in a much more convoluted way. She first collected insect wings, scanned them, then cut up and assembled the scans into 3D sculptures. She then photographed the sculptures, exposed transparencies to the cyanotype process, then copied and enlarged the cyanotypes, finally printing them out on inkjet printers. Wow! What a lot of manipulation! But what she got were images of objects that seem made out of light. They almost look like animated versions of atoms buzzing around in space. 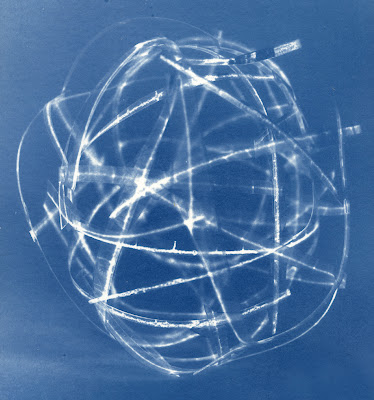 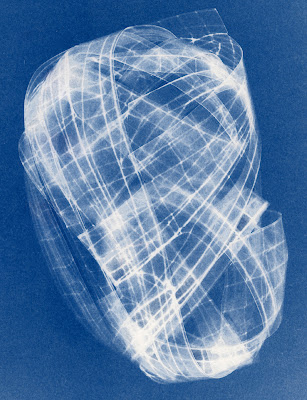 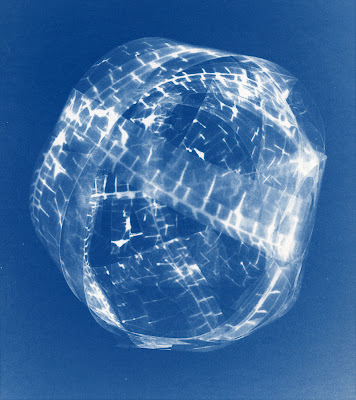 Anna Hepler was chosen to be the first artist in a new series of exhibitions at the museum called CIRCA that will focus on contemporary art in Maine. This is a great beginning for the series and the museum did a very comprehensive job of presenting it in a nicely installed exhibition, large color brochure with many images, full image gallery in high and low resolution on the website, image checklist with sizes, 12-minute professionally-produced video running in two galleries at the museum and available on the website, links to reviews, Hepler's statement, c.v. and website link, press kit, etc. All museums should do as much for their exhibitions. Kudos to the Portland Museum of Art for dotting all the eyes and crossing the tees.

I was very impressed with the architecture of this buildiing. The spaces were interesting and details of lighting, stairways, windows, etc. were unusual. The building was designed by Henry Nichols Cobb of I. M. Pei & Partners and opened in 1983. I thought it had a much more contemporary feel. I enjoyed my visit and am looking forward to more exhibitions in the CIRCA series.
Posted by Nancy Natale at 12:46 AM

Blue tarp: the material of Katrina. It's amazing to me that nowhere in her video does she mention its poignancy, its layered meaning. And how ironic to use a lightweight material so heavily weighted with a meaning lost on both Hepler and probably most, if not all, of her Portland audience. 'The Great Haul' would still be beautiful in the New Orleans Museum of Art, and yet it would reduce our audience to tears or at the very least, leaves knots in our stomachs. Thank you for another great post, Nancy. I've forwarded it to the arts writer for the Times-Picayune, as well as the contemporary curator at NOMA.

Wendy, it's true that the special meaning of the blue tarp to people who lived through the debacle of Katrina and its aftermath was lost on those in the Northeast. That is a very poignant connection to a horrible time and I do wonder what the reaction of viewers would be to this work in New Orleans. Thanks so much for reminding me and my readers of the weighted meaning that the blue tarp has for New Orleans.

While you were in PMA and absorbing this lovely show, I was driving back to Mass.! Thanks for this thorough and thoughtful presentation of the show. I'll have to check out the video. I love all of this work.