Sculptor Lee Bontecou is someone whose work I have long admired. During my recent trip to New York, I visited the smallish exhibit of her work at the Museum of Modern Art, entitled "All Freedom In Every Sense." That title is a quote from Bontecou in a 2002 letter in which she said that she wanted her work to be about "as much of life as possible - no barriers - no boundaries - all freedom in every sense." (quoted by Elizabeth A.T.Smith in her essay about Bontecou in Lee Bontecou: A Retrospective, a beautiful book published in conjunction with a 2004 retrospective of Bontecou's work that was curated by Elizabeth A. T. Smith and Ann Philbin, co-organized by The Museum of Contemorary Art, Chicago and the Hammer Museum, Los Angeles.)


The course of Bontecou's art career is as original as her work. She hit the high point in the late 1950s and '60s, was "rediscovered" in the 1990s and came into her own in the 2000s. In part 2 of my post, I will go into more details of her history. Today I just want to show you some photos that I took at MoMA last month.

The MoMA show had only two of her wall-mounted steel, canvas and wire sculptures and they were two that MoMA owns. I'm not sure whether MoMA owns the other work in the show - mostly drawings and one work that hangs from above. Getting to see her wall sculptures up close and personal was a real treat for me because I could really look at the detail with my myopic perspective.

Bontecou learned to weld one summer at the Haystack School in Maine after studying painting at the Art Students League in New York and sculpture with William Zorach. During a Fullbright year in Rome, where she worked on sculptures of abstracted animal figures, she discovered that the blowtorch she used for welding could also be used as a drawing tool by turning off the oxygen so that it emitted soot. When she returned to the U.S. and began working in a studio on NYC's Lower East Side, she utilized the torch both for welding and drawing, creating welded steel armatures to which she attached pieces of worn canvas collected from a neighborhood laundry. She added varying shades of darkness to the canvas using soot from the torch.


Bontecou was quite successful with this work, showing at Leo Castelli's gallery and being accepted as one of very few women artists at the time. Her work continued to develop in new directions from these wall sculptures, and I'll show you more of this in my continuing post about her.

One of the directions in which her work developed was in airy, galaxy-like pieces that hung from the ceiling and were composed of hundreds of small pieces of wire, wire mesh, porcelain and other materials. MoMA had a large work of this type on display and I found it fascinating. It moved slowly in the air currents and cast intricate shadows on the cleverly-installed platform beneath it that also served to keep viewers at a distance. 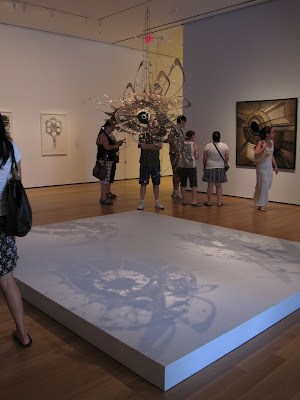 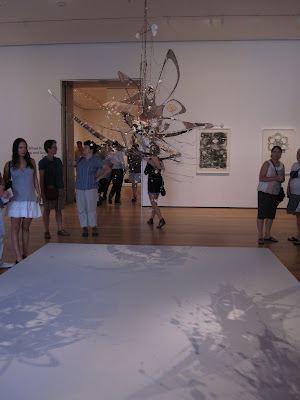 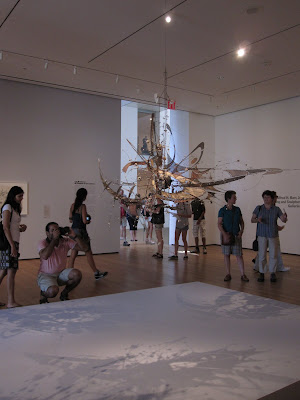 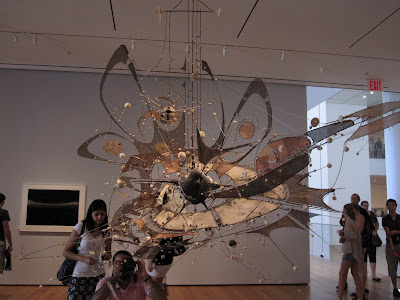 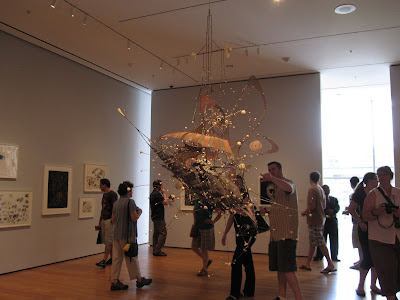 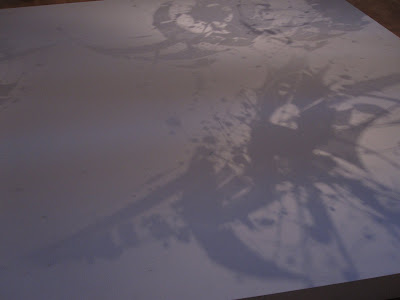 Tune in again for part 2 in which I include more photos of Bontecou's work.
Posted by Nancy Natale at 9:21 AM

Thank you for sharing your thoughts and pictures on the work of this important artist. I just saw one of her works in a show at the Pompdou Center in Paris but I've never seen any of the hanging pieces. I loved the element of shadow in the work.

Thanks for commenting Terry. The hangig piece was really fabulous and the shadows are great. MoMA had it lit perfectly.

Hey Nancy, what a coincidence. Just got back last week from 2 weeks in paris...and i took a shot of a great piece of hers in the museum at the Pompidou Centre. If i have a chance, I will email it to you. wall piece, neutrals with red.

Thanks for an introducing me to a fascinating artist. The shadows of the hanging piece look stunning.

Enjoyed this write up immensely. I too visited MOMA recently and was deeply moved by her art.
Thank you for sharing.

I'm not sure when I'll be in NY so I probably won't get to see this show. She's a great artist, and I appreciate you sharing your wonderful photos of her work!

Thanks, Sherrie, Annie, Munira and Cynthia. I'm glad you enjoyed seeing Lee Bontecou's work here and hope you will pass the word along about her. She is an under-recognized master and deserves to be right up there alongside the better-known names of the trailblazers.

She is a hero for me too, and her body of work astounds. Thank you for collecting so many images and thoughts about her in one spot.

Wonderful post--and to think I was only familiar with her drawings. Thanks for the eye opener!