Work in the Studio

Bulletin: Sometimes I actually do make work in the studio. This summer has not been particularly productive because it's been so hot. Lounging around on the couch with a good book, a fan and a cold drink has been much more appealing, but my brain has been actively thinking about making things so that I was able to plug away when I finally got going. I have several large pieces that are the beginnings of series. Now they just need some sister works to round things out. Meanwhile, here's a peek:

This is Running Stitch, 24"H x 66"W x 1.75"D on three panels. This is patinated copper, rubber, cut up books, found metal and other objects with encaustic on birch panels. I named it Running Stitch because I was thinking about the horizontality of it all, and then when I was fusing with a hot tool, it dawned on me that the tool was called a shoe. Wow! Serendipity.

Once a piece gets to be this big, it's very hard to photograph with a little point-and-shoot camera. I always get the warping of the horizontal and it's hard to see detail. So I had to crop it to be straight and it looks like the horizontal pieces at top and bottom are strangely cut off. They are not in reality. You can click on this and see it larger on a separate page. 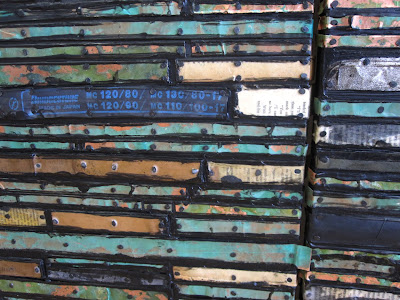 Here's a closeup of one of the panels. You can see the tacks and black encaustic between the horizontal rows.

I like this piece for its blackness and texture, and because of the bare copper in spots, I also like it when the light hits it at an angle and the copper reflects. 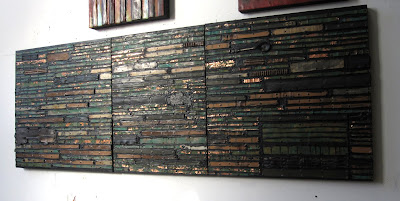 Here's a studio snapshot showing how it picks up the light and how the hard surface of the metal contrasts with the soft, textured wax (and other weird stuff).


I made one other piece like this - so far - but I treated it a little differently.

This is Thinking of You, same materials but smaller at 16"H x 56"W x 2"D. I gave it this name because the stripes and drips reminded me of thought balloons. 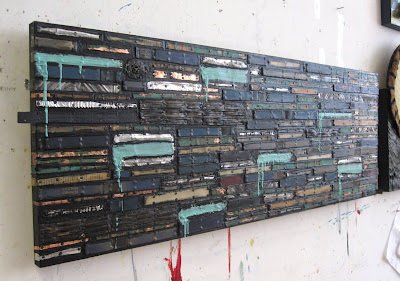 Here's a side view of this one on my messy studio wall showing the texture and reflective metal.

Now I just have to get out my trusty hammer, knife, brush and shoe (tool) and continue the series.
Posted by Nancy Natale at 7:58 PM

keep those sisters coming! you know I love them!1artist

This is some terrific new work. Congratulations, Nancy.

Wonderful pieces, Nancy. I can see that they would be even more so in person. It is hard to photograph large pieces and still be able to really see them as they should be.

I believe you work in your studio! PLUS all this blogging and art viewing and thought is a counterpart to your work, no?
Nancy these are beautiful and pretty intense. Do more!

I love these, especially the last one. Beautiful job!

Thanks for your comments, everyone. I appreciate the positive feedback! Sometimes it gets lonely in the studio and I need a few visitors.

These are exciting pieces. Great surface, color and very open to interpretation. I like the messy wall behind one of the pieces. That could become part of the work for a show. I see Installation!

Stunning work. I can only imagine the actual complexity and texture.

I love hearing about inspiration incubation (often known as reading and enjoying a cool drink) and then seeing the results.

Knocked me out NN. Great shots, would love to see the work in the flesh of course.

Oooh -- I love the book pages and the reflectiveness of the copper and the scale and the very idea of your constructing it piece by piece. And I like that both of these artworks are abstract, while their titles are far from it. Thank you sharing. I wish I could see this in person.

Hey NN!!! Congratulations...looks like all that incubating of idea has hatched some beauts!!!!

I like the horizontal feel and the combination of elements, they seem to seamlessly blend. Interesting choice of materials... I am glad you are painting!!

Wow! You guys are great. Thank you so much for all your wonderful comments! I really appreciate it.