New Work with Help from The Boy

Here are two new pieces that I made yesterday and today with help from the Fat Boy torch. They are both 24"x24"x1.5". I have never made work so quickly or with such a feeling of empowerment. What a rush! 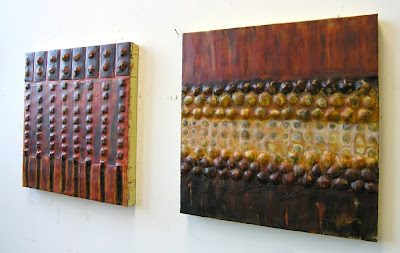 On the left Big Boned But Fiery and on the right Thicker Than Water.
I had resisted getting a torch because I was afraid of the open flame, setting myself or the studio on fire and/or causing an explosion. But as more and more friends (especially Lynette Haggard) told me that they were using torches*, I decided that I had to take the plunge. I actually did have a torch that I had bought a while ago that was part of a plumbing kit, but to hook up the nozzle, you had to pry the lid off the container of propane and that scared the hell out of me. When Sue Katz told me that you could get a kit at Home Depot that had a hose and a self-lighting nozzle, I knew I had to do it. That's how the Fat Boy and I met and it was love at first strike. 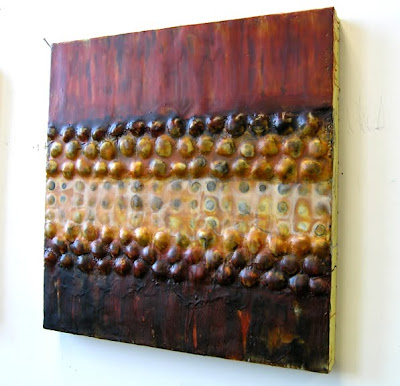 Thicker than Water at a slight angle. 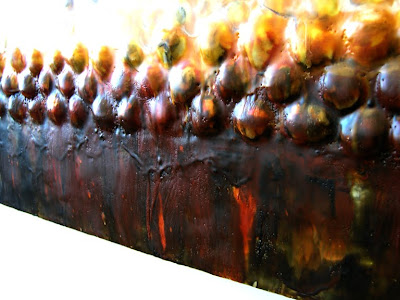 Closeup of the bottom of Thicker Than Water. I worked this part by applying the paint with the piece flat, then hanging it on the wall to use the torch on it and then laying it flat to scrape some of the drips off. And then back and forth adding paint, torching, scraping, etc. Pretty soon I'll have arms like Michelle O. because this has a lot of wax on it and is pretty heavy.
Readers of this blog with long memories may remember that I was trying to reuse two 24"x12" pieces that I had taken off another work. Below is a photo of an early stage of one of the reworks. You will note that the square panel on the left is what eventually became Thicker Than Water. I gave up on using the narrow piece with this because it just wasn't working out. My head is now in a different place and I just have to go there. The Fat Boy is leading me. 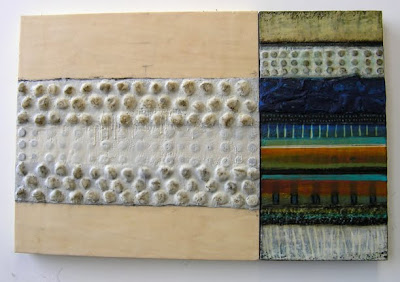 Below is the second piece that I made today. I have a couple more early photos of this to show you because I had also intended to use this panel in combination with the second 24"x12". These pieces were just not working out no matter what I tried. 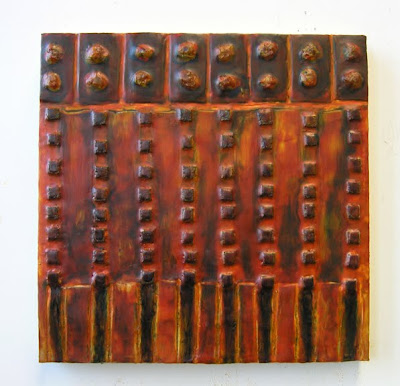 This is Big-Boned But Fiery. 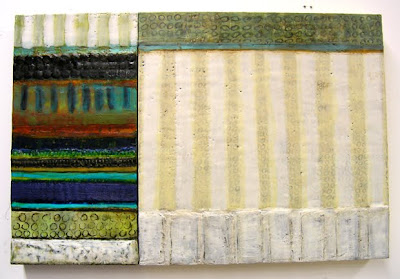 Here it is in an early stage with the narrow piece beside it. Dull, dull, and nothing in common with the companion.
When I went into the studio this morning, below is a photo of the way Big-Boned But Fiery (BBBF) looked. The holes that you see were where I dug out some additional inclusions that I decided were too much. Then I had to fill the holes with medium, add more paint and scrape down some to level everything off. I worked a long time to get the color right and integrate the inclusions that I left in. 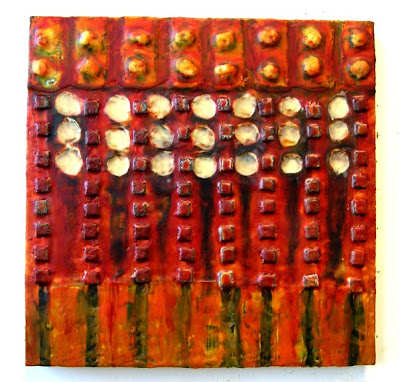 I love orange, but the danger for me is that it gets looking too carnivalesque, so I always have to take it down a notch or two from where I start. 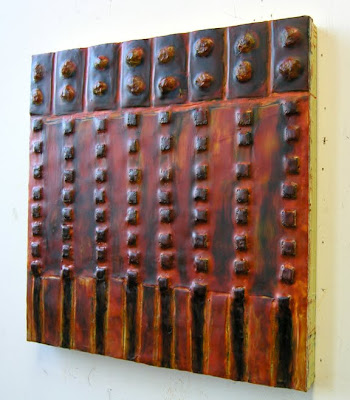 The final version of Big-Boned But Fiery.
A word about inclusions: Yes! I like them because they set up a pattern and add dimension. I find that I use them in a kind of ritualized way that provides an anchor for the painted surface to play off. My eye is always drawn to these organized, patterning elements when I'm looking at something. Is this an architectural or sculptural affinity? I'm not sure, but there it is.
I was worried that I wouldn't be able to use a torch with the inclusions, but so far it seems fine. I can see that threads catch on fire, but it goes right out once the thread burns down (how do I know that?). I also learned that sometimes the heat gun rather than the torch is the best tool for a particular section of the painting if a slower, calmer heat is called for and this knowledge seemed pretty intuitive.
All in all, my initial experience with the torch has been great. I've already started another 24"x24" that goes with these two pieces and setting it up was unbelievably fast. It's also much easier for me to use the torch instead of the gun because the gun takes so long that holding it in place irritates my bad shoulder.
My advice to all encaustic painters is to go out, get yourself a Fat Boy and get happy.
*Lynette Haggard is doing a demo at the 2010 encaustic conference on torches as she did this past year.
Posted by Nancy Natale at 10:01 PM

Nice new work Nancy, it looks great! Glad you are being productive over the holiday. I am down in NC with my family. Far away from my studio...
Linda

nancy, when i saw these pieces, my instant reaction was a strong desire to reach out and touch them. beautiful and sensual.
--april geiger

Thanks, Patricia.
and thanks, April. So nice to see you here!

Your former fears are my current fears:) I will pull a piece of ceramic from raku kiln at 1850 degrees with out a second thought...but working with propane and torch scare me silly!!

Your work is so very inspiring...your courage to conquer your fear is also inspiring. Look forward to seeing your companion piece...just wonderful colors and texture!!

Thank you for commenting, Wondrous. We have to tame the fire and make it work for us.

I just love the pieces you did with the fat boy, Nancy!
Very inspiring. We do not have a Home Depot nearby, but perhaps I can order the torch online. It sounds like a "must-have"....