The Platonic Ideal of Encaustic

Through my Google alert, I came across a review of a show of works in encaustic by Alex Ebstein that appeared in the Baltimore City Paper on 4/29/09. I was surprised, first, that there was such an extensive review of any art show since critics are so scarce these days. Secondly, it was very critical (read: not in a good way) of the work, for what I thought was a peculiar reason; the critic had an idea in his mind of what an encaustic painting should look like and this work did not measure up. What he wanted was Tony Sherman's work:

"Wax Actual, the group show of representational, encaustic painters in the Creative Alliance's upstairs Amalie Rothschild Gallery, has trouble finding a voice for the medium it seeks to champion. The encaustic medium--basically pigmented hot wax, which is generally turned to for its seductive ability to capture light or produce flat or uniquely textured surfaces, as in the paintings of Canadian artist Tony Scherman--loses its excitement between the conservative imagery and erratic application. Curated by Creative Alliance's resident encaustic painter, Christine Sajecki--whose work far outstrips any artists she includes--and writer Joseph Young, the exhibition looks self-defeating, presenting the medium, in most cases, as extraneous."
This very strange review does not fault the creators of the 10 paintings in the show for their ability to make good paintings, but chastizes them for making encaustic look like watercolor, oil or acrylic. Isn't that weird? If it were a show of oil paintings, I'm sure he wouldn't use the same basis for criticism - that the paintings failed to use oil paint in a way that he thought they should.
The reviewer complains "Without the title tip-off, it would be hard to guess that encaustic is a common thread throughout the show." Isn't that a good thing? The artists were concentrating on making paintings and were not so intimidated or overwhelmed by considerations of the medium of encaustic that they just made paintings. Why is that bad? 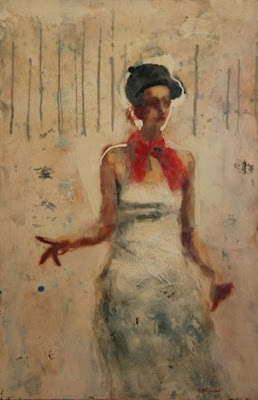 Painting by Christine Sajecki - "stardom and splendor and luck," 20"x30" encaustic on birch, 2007
For example: "In the hexagonal "El Jardinero," Margarita Friedman portrays a vibrant portrait of a gardener. While the painting is technically excellent, and the portrait undeniably charming, Friedman's medium is questionable. The bold palette and the painterly application of the medium are so similar to oil that the choice of encaustic appears superfluous. The luminescence that encaustic can capture in a surface is lost in the dimples of the brush strokes and the boldness of the color, rendering the medium unrecognizable." (Sorry, I could not find an example of her work on the internet.)
Or another complaint: "Jeff Schaller's "London" shows a woman in an unnatural, hunched posture with the word "London" painted horizontally across the canvas. While the overall image is slick, the paint is applied thinly with no attention given to the medium's ability to be built up and modeled." Apparently this critic thinks that every encaustic artist has to employ the same method of painting. But one of the beauties of the medium is that it can be used in so many ways. 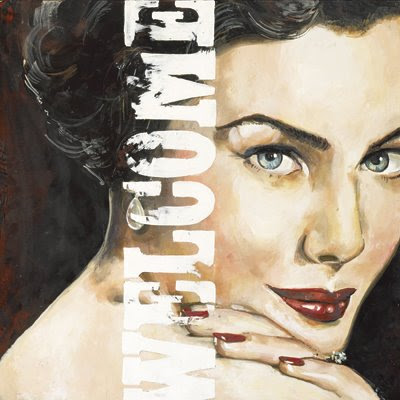 Jeff Schaller "Welcome Back", encaustic, 36"x36"
Or how about this which I think is mostly approving: "Sandra Sedmak Engel, Pat Dennis, and Rebecca Cason, all Baltimore-based painters, demonstrate a contrastingly sophisticated craftsmanship, if slightly more passé imagery. Engel's stylized portrait of a young woman, entitled "Going to Brighton Beach," is composed and crafted like pieces of a puzzle. Relatively smooth and pleasingly waxy on the surface, closer inspection reveals what looks like a careful, reduction process of grooving the hardened background before adding additional color to the surface. Her meticulous manipulation of the wax prevents the colors from mixing, and produces crisp, controlled line work." 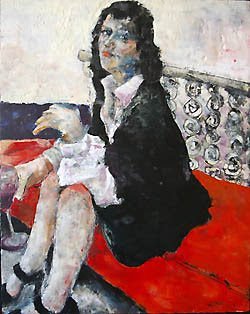 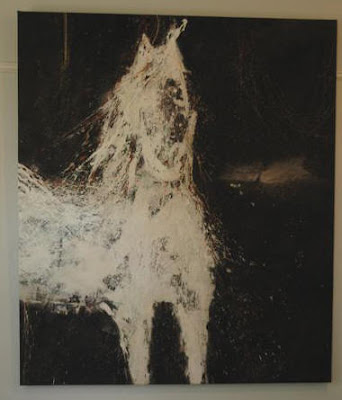 Image by Pat Dennis - not sure if it's oil or encaustic - uh oh! 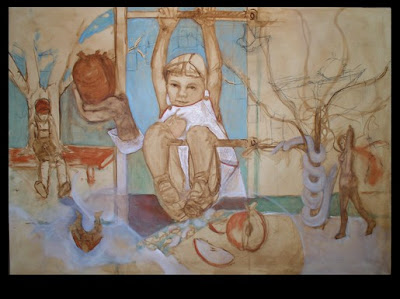 The review concludes: "The exhibition overall is an insignificant sample of the encaustic medium. Aesthetically inconsistent and undoubtedly limited by its given space, the show fails to present a compelling case for the narrow subject matter on which it focuses. In presenting a show of encaustic work, a fairly unpopular medium, broadening the subject matter and choosing the best examples of encaustic painting would have better served the general curatorial mission."
I'm not even going to comment on the description of encaustic as a "fairly unpopular medium."
This reviewer just didn't get it because the curators spelled out their mission, which was to assemble "work from contemporary artists who seek verisimilitude in their paintings through the inherent qualities of wax. We looked for work that uses the properties of wax—both its ability to hold shape and light and its pliability—to their best effect." This seems reasonable. They had a very limited space and so restricted their selections to representational work in encaustic.
So all this got me thinking, isn't the medium strictly the choice of the artist? It's the means that an artist chooses to make the work that the artist wants to make. Outside of that, who cares? Unless you collect works in a particular medium, what's the difference? It's the work that counts, not what it's made from. Encaustic will do pretty much whatever you want it to do and smell good at the same time. Can't beat that!
Posted by Nancy Natale at 9:16 AM

Good post, Nancy.
I hope you'll send the critic a link to your blog because as you point out, the only "limitations" of encaustic are in the thinking of the critic him/herself.

Thanks for your comment, SS. ...or of the artist!

thanks a lot for the thoughts, Nancy. note that Alex Ebstein is a woman.

Whoops! Guess my Platonic ideal of a critic was male.

Hey, thank you Nancy, I appreciate you sticking up for the show and doing such research ~

This is a tricky thing. I understand both points of view, yours and the critics. Content and form should be one. There are certain inherent properties to encaustic that avail it to certain types of expression. If one isn't going to exploit the properties of the chosen medium then why use it? I think the critic was too harsh, but has a point as do you. Why does it matter what is used if it is only the expression if the image that matters to the artist? U are correct, it doesn't. But if the focus of the show is the materials used than I can see why the critic was disappointed that the beauty of the encaustic material wasn't allowed to be felt and seen. Instead it became a slave to the imagery. The form (encaustic paint) had nothing to do with the content of the imagery so why use it? That was his point. Your thought seem to be "because they wanted to" but the paintings would be just as strong if they were oil or acrylic so perhatshirt show should not have made a big deal about it being encaustics as that appears to be superfluous to the work.