Yesterday was the opening of our show of works in encaustic, Ancient Medium, N.E.W. Terrain, at the Art Complex Museum in Duxbury, Mass. The show runs until September 6th, and we hope that some of the encaustic conference attendees will make the trip to Duxbury to see the show of some 70 works by 23 members of New England Wax. 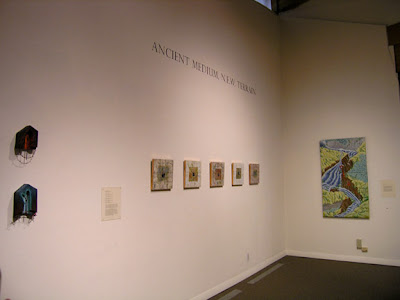 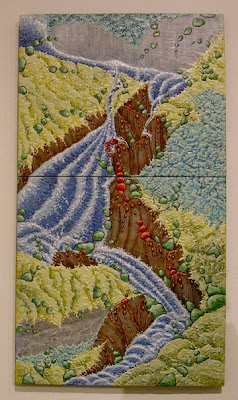 Greg Wright's complex encaustic painting "Current Tendencies", 54" H x 30" W. This image is darker than the painting's real colors and doesn't show the probably 8 million dots of paint that build up its surface.

The museum's curator, Craig Bloodgood, juried the show from digital images and did a beautiful job installing the work. 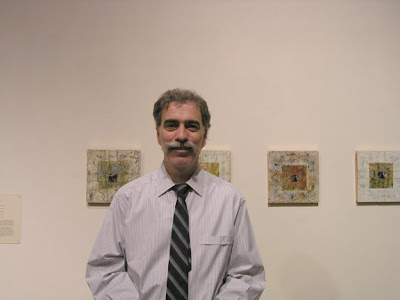 The Art Complex Museum building is an unusual shape, and the large gallery where our show was installed contains a smaller rectangular gallery in the center of the space where selections from the museum's print collection are shown. This means that N.E.W.'s work was shown around the perimeter of the gallery. 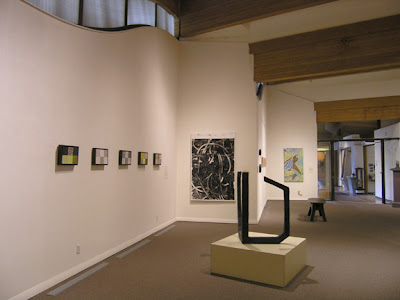 This view is looking back toward the entry door and shows the work of Jeanne Griffin, Beverly Rippel and Richard Keen on the pedestal. 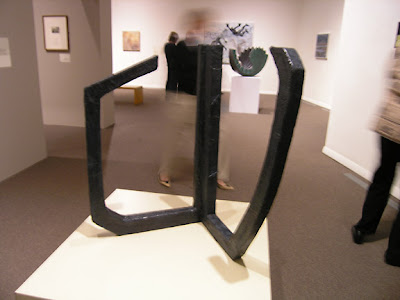 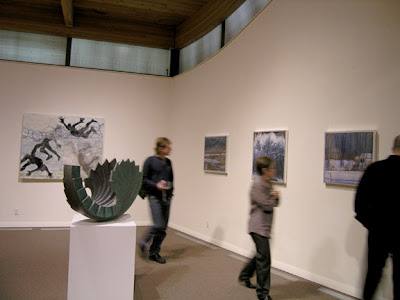 Continuing along to the back right corner of the gallery, work left to right is Binnie Birstein's "The Fence", Kim Bernard's "Carapace" and three pigment prints with encaustic on paper by Mary Taylor. 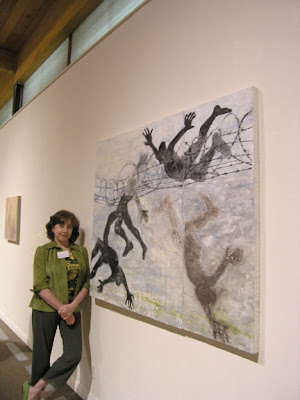 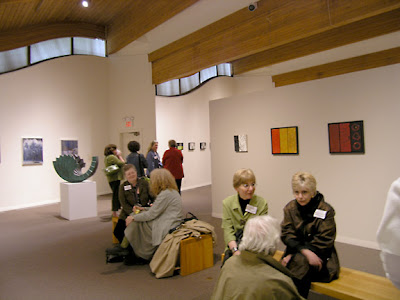 Turning the corner to the back of the gallery, there were benches with artists and viewers and four encaustic paintings by Julie Shaw Lutts (three visible here). On the perimeter wall opposite are five works by Donna Hamil Talman. 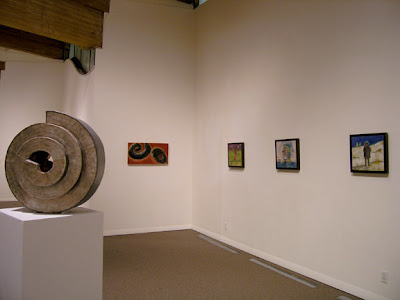 Continuing along, on the right, three works by Helene Farrar, then one by me, "Metamorphosis," and another sculpture by Kim Bernard, "Chambered Nautilus." 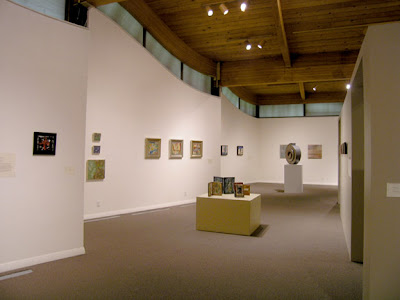 Turning around and looking back toward "Chambered Nautilus," we see L to R: "Cross" by Viola Kaumlen, three paintings by Catherine Weber, three collages by Diane Bowie Zaitlin, and four books on the pedestal by Jeanne Borofsky. 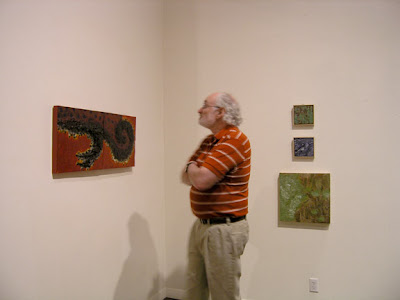 A viewer studying my work "Glow Worm" and behind him three of Catherine Weber's paintings from her lichen series. 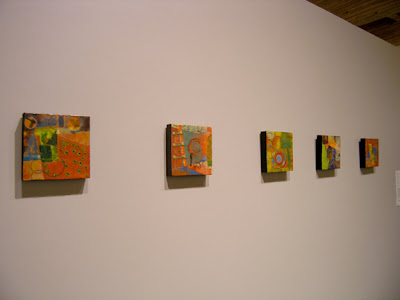 Five paintings by Kellie Weeks hung opposite this. 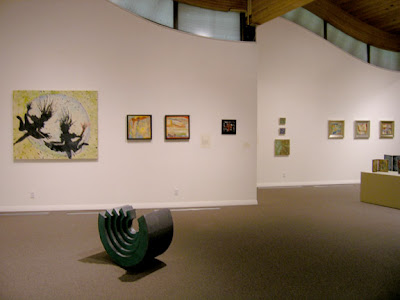 Further down the perimeter side are L to R: Binnie Birstein's "Alice", two collages by Diane Bowie Zaitlin, Viola Kaumlen's "Cross." The piece on the floor is "Convolution" by Kim Bernard. 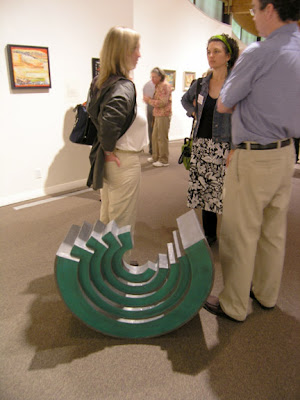 Another view of "Convolution" with Kim Bernard (in headband) and two visitors. 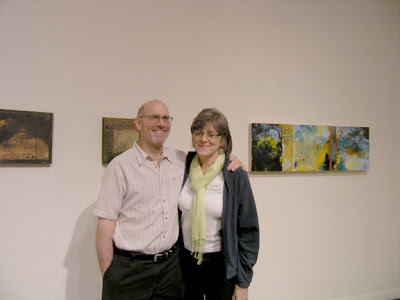 Greg and Lynette Haggard with Lynette's painting "When It Touches" at right. Works at left are by Dot Krause. 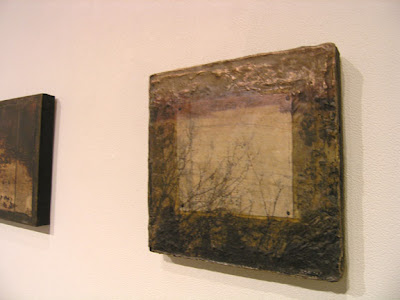 Closeup of a work by Dot Krause, "A Small Opening." 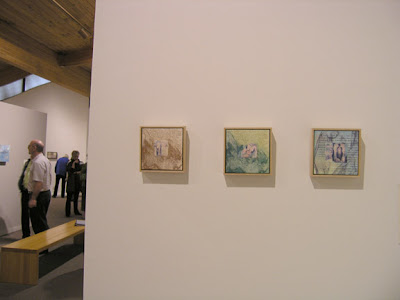 And next to Dot Krause's pieces were three by Jeanne O'Toole Hayman. 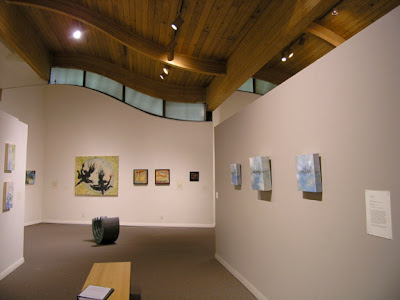 Turning around and looking back toward "Convolution," we see two paintings by Kimberly Curry on the left and three by Charyl Weissbach on the right. 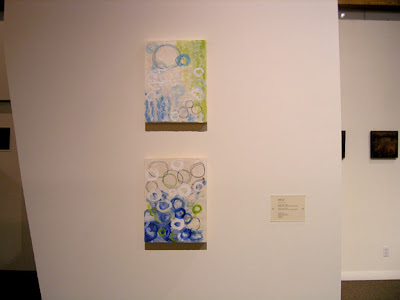 Here are "Upwardly Mobile" and "Change in Motion" by Kimberly Curry. 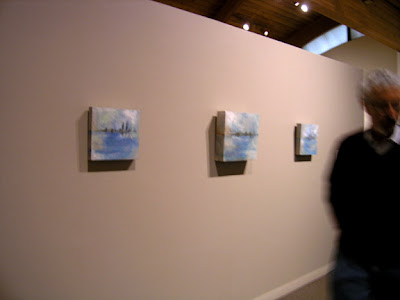 And three works from her water series by Charyl Weissbach. 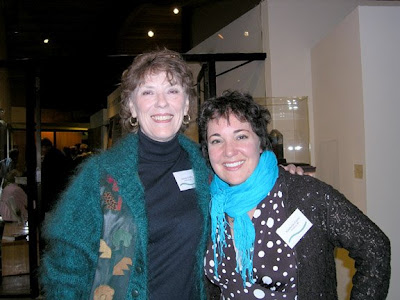 What a beautiful exhibition of paintings and sculpture. I hope to see it when I come up for the conference.
Gwen

Thank you, Gwen. I hope to see YOU at the conference!

Thank you so much for the shout out for NEW. It is a great show! Super pictures, Nancy!

Nancy,
Very nice reporting. And congratulations to all the artists who participated. Looks like a terrific show!
Joanne

glad I found your blog would love to try this medium.