Hitting our stride late(r) in life is something that happens to women, usually because of having children and deferring our careers due to social pressures. While I never had children, I took quite a while to take myself seriously and pay attention to what was meaningful to me. I had to grow out of the influence and (lowered) expectations of my family and become my own person before I could begin my great journey into art.

It validates my own history to read about artists who find recognition later in life. Alice Neel is one of those artists, and I recently finished a new biography about her by Phoebe Hoban called "Alice Neel: The Art of Not Sitting Pretty." I recommend it as a good read about someone who put her painting above just about everything else in her life. This is not the usual course for women but pretty much the norm for many male artists (at least in the past  - maybe there's a difference now?). However, Neel's priorities make for some tough reading in places, especially when it comes to her children, who seem to have gotten very short shrift from her until she was older and more financially independent of the men in her life.

Hoban's book traces all of Neel's "quintessential bohemian" life while proposing her as the archetype of women's coming into their own:

"Neel's life is not just the saga of a great American painter; it is a great American saga. Born into a proper Victorian family at the turn of the century, Neel came of age during Suffrage, struggled through the Depression, and lived through the women's liberation movement and the sexual revolution, reaching her prime in a time when she was finally permitted to do--and even celebrated for doing--just what she had striven to do all along: forge the life of an independent woman who was first and foremost an artist. Neel's personal and artistic growth was often at odds with the century that shaped both her and her work. But when the anti-establishment sixties arrived, Neel, then herself in her sixties, arrived, too. The lifelong iconoclast and rebel against institutional values was finally at one with her era." (pg. 3)

I'm finding it difficult to write about Neel because there are many choices that she made in her life that I think were wrong--and not just wrong but really bad decisions because of the way they affected her children. Not my place to judge, you might say, or how can I know unless I was in her situation? True but that doesn't stop my feelings about her. While I appreciate her difficult artistic journey and admire her painting ability, I finished the book not liking her much as a person. I think that although she made painting her priority, she compromised herself too much and actually sacrificed her children's well-being. From early on in her life, she traded her good looks and sex appeal for support from men, and throughout her life she chose partners who abused her and her children in many ways. Isn't keeping your personal integrity worth as much as making art? Or, how can you make art when you have given your core self away?

Neel lived in Greenwich Village and then Spanish Harlem for a long period of her life. She suffered through a bad first marriage, the death of her first daughter at less than a year old, the removal to Cuba of her second daughter by her estranged husband, suicide attempts, a nervous breakdown and hospitalization in a psychiatric ward, the Depression, the destruction of hundreds of her works by a jealous lover, and the lack of recognition of her painting ability. She lived in poverty for most of her life and supported herself and her children by working as an easel artist on the WPA Program for more than 10 years. When that program ended, she collected welfare for a number of years. She lived with several men who contributed to her support, and she also took in roomers to help pay the rent. She continued to paint all through the many tumultuous events in her life, and her devotion to portrait painting remained constant through Surrealism, Cubism, Abstract Expressionism, Pop Art, Conceptualism and all the other schools of art to which she never belonged. 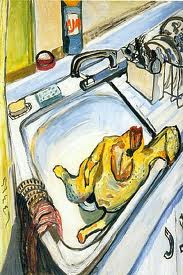 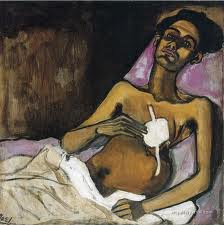 By the early 1960s, Neel's work began to change: her palette became lighter and more saturated, the paint looser, the black outline turned to blue, the canvases got larger and the subjects were no longer neighbors but art world celebrities. And Neel started to show: "Between 1927 and 1964, Neel had only about half a dozen solo shows. During the last twenty years of her life, from 1964 to 1984, she had over sixty." In 1963, at age 63, Neel signed a formal representation agreement for the first time in her career with the Graham Gallery. She remained with that gallery until 1980 when she joined the Robert Miller Gallery.

By 1970 when Neel painted a portrait of feminist writer Kate Millett for the cover of Time, she had come into her own as a celebrated woman artist. She claimed to be a feminist before there was feminism, and did not like the label being attached to her, but she benefited from the sweeping interest in art by women that the feminist art movement brought about.

After the Time cover in 1970, Neel's career accelerated with national and international shows, magazine articles, speaking engagements, awards, a retrospective and an honorary doctoral degree from her alma mater, Moore College of Art in Philadelphia, and a retrospective at the Whitney. She even appeared twice on the Johnny Carson show in 1984, where she was a big hit.

Neel kept painting until the very end, even after she was diagnosed with advanced colon cancer and underwent surgery, completing eight paintings in her last six months of life. Several days before she died at age 84, Robert Maplethorpe went to her apartment to photograph her, at her request. She was very ill, after having undergone chemotherapy, and closed her eyes so that she could see what she would look like after she died.

Neel's grandson, Andrew Neel, made a documentary about her life that premiered in 2007, "Alice Neel." Here's the trailer which shows scenes of Alice painting and talking about her work.


Finally, here's an excellent article about women finding success as artists at an advanced age. This link comes from my friend Deborah Barlow at Slow Muse blog.
Posted by Nancy Natale at 11:58 PM

Thanks Nancy for an excellent post, enjoyed this much. :)

I had to read this post 3 times. In the 70's, when I was in art school, I fell in love with Neel's work. I only ready a little bit about her at the time, enough to learn that she was a little, um, well off beat and off balance.

After reading your review, I can't read the book, but will try to see the film. I totally agree with you that if she sacrificed her children and integrity for her art that there was something amiss. It's really too bad that back then, women were so pressured into having kids even if they didn't want them.

When I look at her portraits, they are so amazing because they are deep and raw and alive. That's the beauty of them.

Thank you Nancy for this fine article. I too have been a longtime admirer of Neel's work. I recall seeing her on the Tonight Show. She was clearly a "character".

Alice Neels history is one that many woman share in regards to cultural expectations and dependency. Those things do take a toll but I think she also had personality issues. I watched the video clip and Neels last comments were rather unsetteling. She states that anyone can accomplish anything if they persist. The part she doesn't acknowledge is the price that is paid by those associated with her.

If you think you can't read the book because of Neel's maternal irreponsibilities, you perhaps shouldn't see the documentary (which is very good) either. In her grandson, Andrew Neel's film, her son Richard Neel speaks for movingly about the abuse he suffered as a child at the hands of Neel's long-time partner, Sam Brody.

The facts are the facts, whether they are presented in a book or a film.

Way to go! I love to see articles featuring achieving women! I've been looking into doing some online marketing to promo our heating and plumbing business! Great job lady!