A Double-D Recipe for Disaster

And I thought the magenta turkey was a result of color perception gone amiss! But not so. A blog called "Unwholesome Foods" featured something they called the "TurDunkin" that resulted in a pink turkey after brining. 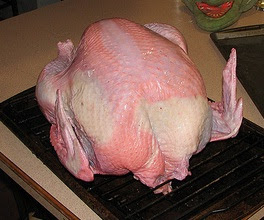 They brined this turkey in orange and strawberry Coolatas (although not enough of them),  plus 4 cups of kosher salt, 1.75 gallons of water, 3 bay leaves and 3 cinnamon sticks. And, oh, yes, the brining container was an empty kitty litter pail. They boiled the brine mix first before covering the turkey with it. (They don't say whether they cooled the brine before putting the turkey in.)

The turkey was stuffed with Dunkin Donuts munchkins plus sauteed onion, seasonings and broth.

When the turkey was nearly finished cooking, it was covered with a glaze based on the ingredients list for DD glazed donuts: 1 lb confectioner's sugar, 1/3 cup corn syrup, 1/4 cup water, 1/4 tsp agar agar and a squirt of lemon juice (no doubt from a plastic lemon). The turkey was basted with the glaze, roasted until it reached 175 degrees, then taken out of the oven and glazed again. Then it was covered with sprinkles (as the crowning touch).

As a final step, the cooks attempted to make coffee gravy to go with, but admit they were unsuccessful in attaining enough coffee flavor. Next time they may make the turkey glaze from jelly squeezed from DD jelly donuts.

Then they actually tried to eat this creation along with mashed DD hash browns - and nary a vegetable in sight.

My one-word review: YUCK!
Posted by Nancy Natale at 10:48 AM

Yet another excellent reason to be a vegetarian (along with deep-fried turkey, hormone-ified turkey and sweatshop-farmed turkey.

I am sorry, but I really advice you to please don't include the pics of meat in your post..specially like the Ist one image..Because as I am a pure vegetarian..I can't see that even...