This is a continuation of my post about Hedda Sterne, an artist born in 1910, who will celebrate her 100th birthday in August. (Note: Click on any image to enlarge it.) 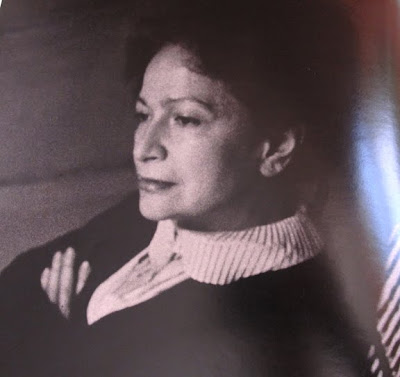 Hedda, ca. 1963-65, Photographer: Theodore Brauner. (Image from "Uninterrupted Flux: Hedda Sterne," a catalog of a retrospective of Sterne's work, published in 2006 by the Krannert Art Museum and Kinkead Pavilion at the University of Illinois at Urbana-Champaign, edited by Karen Hewitt, exhibition curated by Sarah L. Eckhardt. The images and quotes in this post are from this catalog.)


Hedda's second husband was Saul Steinberg, the artist probably best known today for his New Yorker magazine covers. Below is a page spread published August 27, 1951 (titled "Self Portrait With Wife") from Life magazine with Steinberg's work on the left and Hedda's on the right. (Note that the famous Irascibles photo was published in Life earlier that same year in January 1951.) 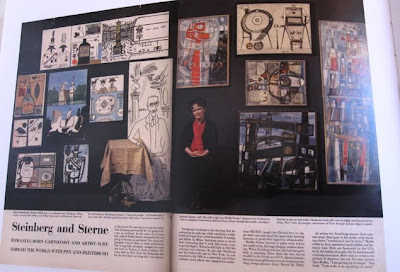 In the Uninterrupted Flux catalog, the exhibition curator, Sarah Eckhardt, divides Hedda's work into 11 categories in order to bring some order to the "consistent inconsistency" that Hedda practiced. Two of Hedda's continuing interests were machines and motion, and she visualized machines as having human characteristics that made them become "anthropographs." She thought that machines were designed as self portraits of their creators and displayed "their needs and insatiable desire for consumption."

Two notable results of Hedda's interest in machines and motion were, first, an exhibition at Betty Parsons' gallery in 1954 where tondo (round) paintings were mounted on central axes and viewers were invited to rotate the canvases as they wished. Secondly, also in 1954, Hedda was included in "Seven Painters and a Machine," where the seven were commissioned by Fortune magazine to produce their responses to a machine called the "Continuous Miner." Hedda's painting was chosen a year later for the cover of World At Work: 25 Years of Art for Fortune. In the early 1960s, Fortune arranged for Hedda to tour several John Deere factories, which provided the impetus for a series of paintings that portrayed tractors. The CEO of John Deere purchased the entire series for the company. 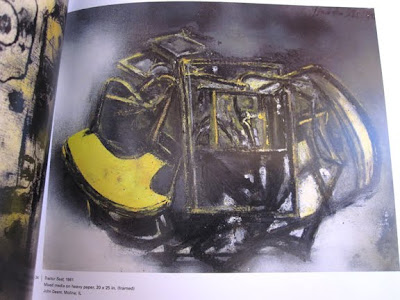 
In the 1980s Hedda painted large, architectural paintings such as the two in the page spread below from about 1982. She referred to these works as "Patterns of Thought" and "Architecture of the Mind." 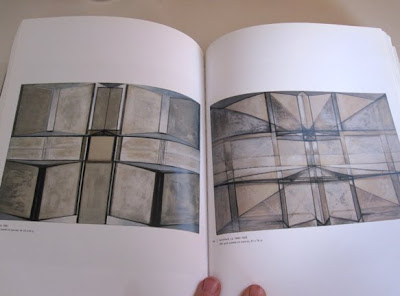 
Art as Diary/Diary as Art
It seems to me that the most appropriate way to view Hedda's work is in the context of her long life. "Maybe I am saying something which is a truism," she said, "but I feel that my work all along was like a diary." Her interests were wide ranging, she read continuously and quoted or paraphrased from her reading or conversations with "poets, novelists, philosophers and theologians." In 1976 she made her art a literal diary by      placing sections of unstretched canvas on the floor of her living space. She drew a grid on the canvas and then filled in one square each day with either a quote, her activities or her thoughts and the date. She alternated between all caps and cursive script so that the grid had a checkerboard look. 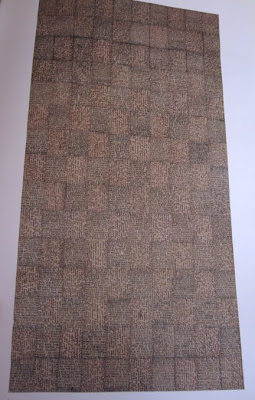 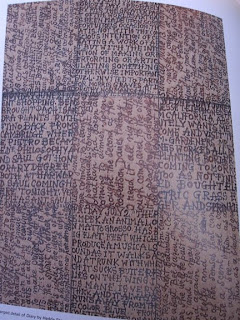 Closeup of Diary, showing variance in handwritiing that made a checkerboard effect.


Last Drawings
In later years, Hedda suffered declines in her health that included macular degeneration. She had to stop painting in 1998 but was able to continue drawing aided by a magnifying glass and motivated by her unswerving determination and devotion to creating art. She drew hundreds of small-scale drawings in pencil, pastel and sometimes thinned Wite-Out. The drawings are untitled but dated with the date of completion. 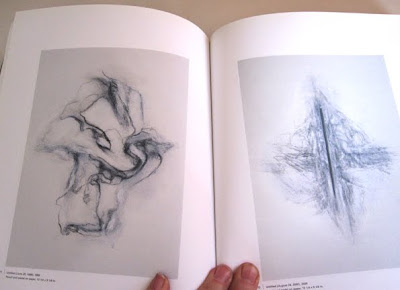 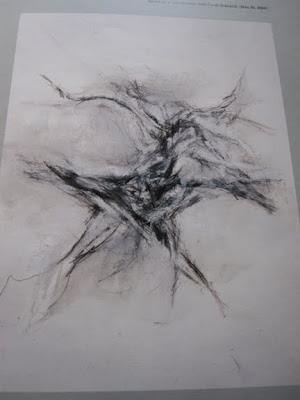 "Sometimes I react to immediate visible reality and sometimes I am prompted by ideas, but at all times I have been moved, to paraphrase Seamus Heaney, by the music of the way things are. (One can find secret significance at the depth of the ordinary.) I believe that simplicity is an invention of man. Nature is never simple. And, the habit of careful study of the visual immediate opens our eyes to the presence of mystery in the seemingly obvious. In art the retinal, intellectual, and spiritual necessarily collaborate, alternating in importance. Art is essentially revelatory. The desire for clarity drives us....

"And through all this pervades my feeling that I am only one small speck (hardly an atom) in the uninterrupted flux of the world around me."     Based on a conversation with Sarah Eckhardt, May 30, 2004. 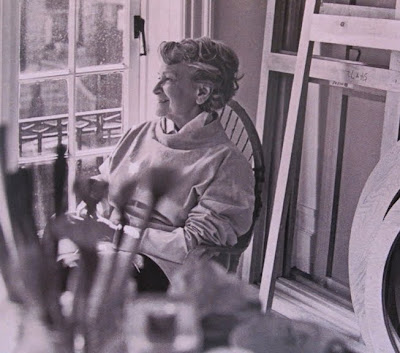 I am inspired by Ms. Sterne's dedication to her art and her determination to continue making it as long as her physical self would allow. Blessing to her.

Thank you for sharing, Nancy. What a truly fascinating woman.

Thank you for your comments, Terry and Tam. I'm glad you enjoyed learning about this inspiring artist.

I love reading your posts about artists Nancy. I learn so much. I put link on facebook.

An excellent report. Thank you!

Thanks, Leslie and Matthew. I'm glad you enjoyed it.

You may already know this, but just in case...August 2010 is the month in which two incredible women artists, Hedda Sterne and Dorothea Tanning who will be celebrating their 100th year birthdays. Hedda, August 6th and Dorothea, August 25th. I think neither have received the recognition they deserve. I deeply admire the lives and works of both women. I check periodically to make sure they are still "alive and kickin'".

Hi Nancy,
Thanks for writing about Hedda, and especially the part about the tractors which I didn't know. I was Hedda's studio assistant during the 1980s and she was a lively and inspiring woman. It was always interesting to me that she had less recognition because her interests would take her in a new direction every ten years or so; this was seen as flighy rather than curious and thoughtful. I just visited her a month ago in New York, and although she sleeps most of the time, at 99, she is still so very very sharp and still wanting to talk about art.
Patti Trimble

Patti, I don't know if you will be reading this, but thank you so much for commenting about Hedda. I have heard from her niece, Veronique, that Hedda is still alert and interested in art. How great that you were able to visit her.

Hi Nancy,
I read that Hedda Sterne died on April 8, 2011, last Friday. I looked for more information about her on the net, and found your lovely blog and March 11, 2010 entry regarding her. Thank you so much for this post. She was indeed a fascinating artist and person. I noticed that Dorothea Tanning was mentioned within the comments (I think she is still alive), another amazing artist who along with Leonora Carrington embolden and bless Surrealism with their marvelous intelligence. I was just reading recently about Rebecca Strand, wife of Paul Strand. She was also a wonderful artist. Women artists of this earlier time period are such a treasure to discover. I was very interested to read Patti Trimble's comments regarding Hedda. How lovely that she discovered your blog, Nancy, to share her thoughts. Many thanks again for sharing.
warmest regards, Deborah Kerner